In the American used electric vehicle market, Tesla's Model S sedan is number two overall in sales, and trails the Nissan Leaf in the largest EV state of California. Tesla is leading the pack with new electric vehicle sales as overall EV adoption in America has slowed from its previous more rapid pace. The Model 3 from Tesla remains the only high volume electric vehicle in the U.S. market as far as we know. Tesla won't say. It lumps sales of the Model 3 and Model Y together, and doesn't like to reveal which markets get new vehicle inventory. These facts and more were revealed by a new iSeeCars.com study. It looked at data from over 54,000 used EV sales from 2019 to 2020. The study focused closely on the 25 states where EV adoption has been the most robust.

One reason that the Model S is second to the Leaf is that they occupy entirely separate market segments. “Despite Tesla’s growth in the EV market, the Nissan LEAF is more popular among used electric vehicle buyers, comprising 27.7 percent of sales, while the Tesla Model S accounts for 17.8 percent,” said Karl Brauer, Executive Analyst at iSeeCars.com*. “This is likely due to the LEAF’s affordability with a used car price of $13,054 compared to a used Tesla Model S at $48,996, as well as its brand recognition as the first mass-market EV that’s been on the market for a decade.” 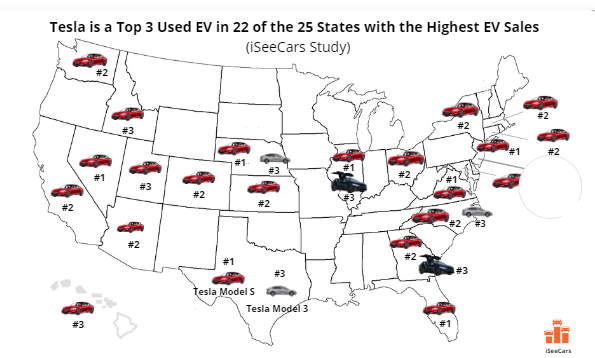 California is by far the state with the most electric vehicles. Although Tesla's Elon Musk has vowed to move out of the tax and regulation-burdened state, California remains home to Tesla's headquarters and oldest factory. “California has led the charge with green vehicle adoption driven by its Zero-Emission Vehicle (ZEV) program, which has been adopted by other states to reduce greenhouse gas emissions,” said Brauer. "This has led to a large market and therefore more competition for electric cars in California, as seen by the fact that the state's share of Nissan LEAFs is 21.8 percent, lower than all other states where the LEAF is the most popular used EV."

The Leaf is most dominant in Hawaii, where the Nissan model captures 61.3 percent of the used EV market. We found it interesting that Hawaii is the third-highest state for used EV sales overall. It really shouldn't be a surprise. "Hawaii generally has the highest gas prices in the country, so car shoppers have the added incentive to purchase electric vehicles,” said Brauer.

The study concluded that Illinois is the state with the highest share of Tesla Model S vehicles with 33.8 percent, with Texas a close second with 33.0 percent. “Illinois doubled its gas tax in 2019 from 19 cents to 38 cents per gallon, which incentivizes drivers to purchase an EV,” said Brauer. “Dallas, Chicago, and Houston are the top three markets for used Tesla Model S sales, which contributes to the popularity of these vehicles across those states.”

Related Story: 4 Reasons Used Tesla Model 3 Cars Are So Expensive - And When It Will Change

Those who view the Tesla Model 3 as the leader in all things electric aren't wrong, they are just early. Tesla only began delivering Model 3 cars in volume less than two years ago. They have not yet had time with their first owners to be traded in or sold on as used cars. If you are a fan of the Model 3 and want a used one, be patient. The Model 3 will dominate this list of used EVs in less than three years.

Check out the full study at iSeeCars.com. Look below the text for a listing of the top-three used EVs by state.

*Source Note: Automotive industry veteran Karl Brauer serves as the executive analyst for iSeeCars.com. Prior to iSeeCars, Brauer was the executive publisher for Autotrader and Kelley Blue Book, the senior director of industry insights at Kelley Blue Book, chief executive officer of Total Car Score, and the editor in chief of Edmunds.com. Brauer was also the first internet-based automotive journalist invited to join the 50-person jury for the North American Car and Truck of the Year (NACTOY) in 2003, and he continues to serve as a juror and member of NACTOY’s six-person board of directors.