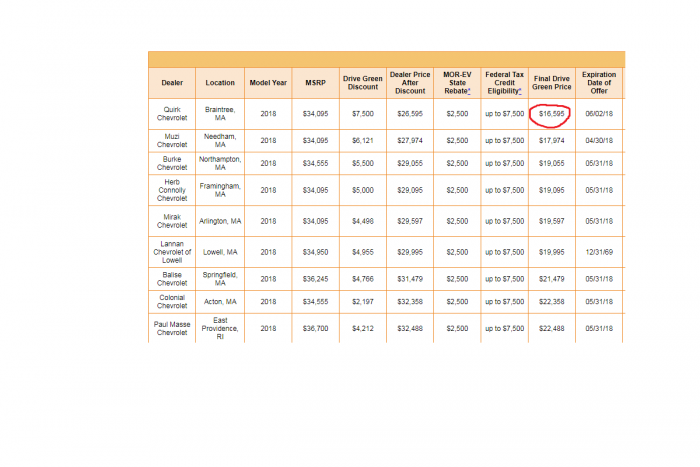 We compare real-world prices of the 2018 Chevy Volt and Prius Prime to the Tesla Model 3.
Advertisement

Real world pricing can be difficult to discern. Manufacturers sometimes make it tricky to figure out exactly what the real price of a vehicle is. We often hear low prices quoted by the media, but are they accurate? And what about discounting, what role does that play in the actual comparison? Fortunately, the state of Massachusetts, one of the CARB- follower states and an EV-friendly place, has set up a website called Drive Green where manufacturers list out the actual pricing of actual EV models they have in stock. The website even factors in the dealers' discounts and both the federal and state tax deductions and rebates. At the end, the final price is shown. Tesla's pricing is also pretty straightforward, and we will explain why.

Here is our price comparison. Please note that in the case of the Volt and Prius Prime, the final price quoted includes the federal and state deductions and rebates.

2018 Chevy Volt
On the Drive Green website Massachusetts sets up, the Chevy Volt has nine participating dealers with Volts in stock. Both the Volt LT and the Volt Premier are available and they both receive significant dealer discounts. The least expensive Volt is an LT sold by Quirk Chevrolet for $16,595. Here are the qualifiers for that deal: "Must finance through GM Financial. 0% x 60 months financing is available. Includes Destination Fee. No hidden fees. Quirk Chevrolet has 266 Volts available as of 4/12/18. Quirk Chevrolet of Braintree earned GM Green Dealer Certification for 2018. We have 4 dedicated knowledgeable EV specialists. Burke Chevrolet has an LT priced at $19,055 with no finance requirement."

The best price on a Volt Premier trim is $21,949 same dealer and same qualifiers. Mirak Chevrolet has a Premier at $24,397 with no finance requirements.

2018 Prius Prime
Interestingly, the best current deals on the Prius Prime are not for the base model but the mid-trim Premium. Prime Toyota of Boston has the Prius Prime listed at $18,441. There are qualifiers. Unlike with the Chevy, the Prius deals are lower if you opt to finance through Toyota: "Special financing deals available through Toyota Financial Services, with approved credit: 0.9% for 60 months or 1.9% for 72. However, if you choose either of these financing deals, the Drive Green discount drops to $1000. Includes Destination Fee, all weather floor liners/cargo tray, and door edge guards. Additional $1,250 rebate available to recent college graduates (6 months prior to graduation or up to 2 years after): see dealership for details. Plates, registration, doc fee, and sales tax not included. IN-STOCK VEHICLE ONLY: T26857 for premium."

The best deal on a Prius Prime Advanced is at Lia Toyota. It is listed at $21,760. The price arrived at is explained in great detail, but too long to reproduce.

2018 Tesla Model 3
Before we get to the Tesla Model 3 pricing, be aware that the above prices are for vehicles in stock. In fact, most of the deals require that one from inventory be chosen to receive the price the dealers quote. Tesla, by comparison, has customers waiting in line while holding $1,000 deposits ahead of you. How many are ahead of you? About 400,000 by the last count. If you have not already gotten in line, that equates in time to about 100 months or eight years based on Tesla's present delivery rate on the Model 3. Tesla says it will build more faster soon, but for the past two months deliveries have been about the same.

Tesla Model 3s sold to date have started at $46,000. None costing less than that have been delivered to consumers. Tesla owners report being steered toward the $9,000 premium package to move up their delivery dates. Let's set that aside for now and just focus on the $46,000 entry price point. Tesla does not discount its vehicles, so that is the buy price. Tesla owners who can take advantage of the federal tax deduction and the state of Mass. (or their state's) discount of $2,500 will pay $36,000. That is more than twice what an entry-level Volt LT costs buyers today and roughly twice what a Prius Prime Premium costs.

We understand that the Tesla Model 3, Chevy Volt, and Prius Prime are not the same cars. However, one thing that is common among all three is that they are the least expensive EVs their brand produces and all were intended by their manufacturer to sell as "mainstream" vehicles.

Notes: Our appologies for the poor image, but we wanted to show the current deals. Note that the deals change over time, so the links in the story may have different data as time passes.