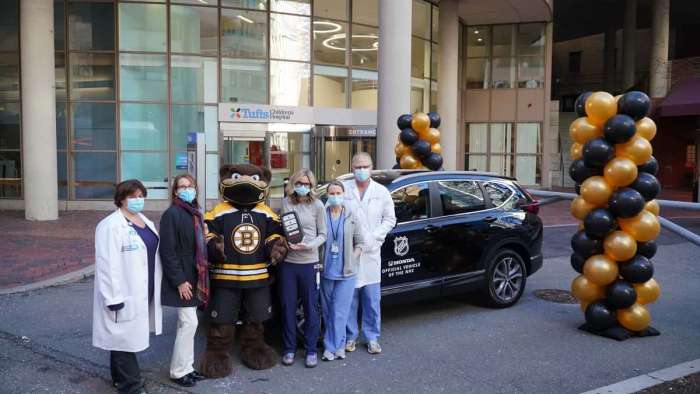 David Pastrňák earned the NHL All-Star Game Most Valuable Player Award this past year. However, we all know who the true MVPs for 2020 are, and so do Honda and the Boston Bruins.
Advertisement

Kaitlin Hagstrom is a frontline nurse at Tufts Medical Center in Boston. Like many healthcare workers, she has been putting her personal health and that of her friends and family in jeopardy this year by working directly with infectious patients. In recognition of her sacrifice, David Pastrňák and the Boston Bruins are presenting Ms. Hagstrom with the 2020 Honda CR-V Hybrid that the B’s forward earned as this year’s all-star MVP. The B’s mascot, Blades, presented her with the keys. 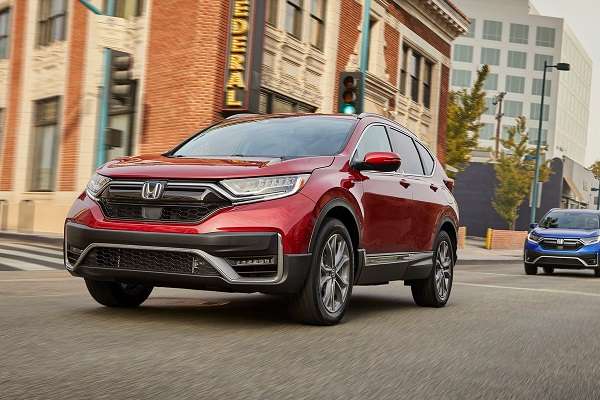 Although only earning about one-third as much as the top-paid NHL star, David Pastrňák tied for the most goals this season, despite missing multiple games to injury. He is also the “perfection line’s” top scorer, beloved by Bostonians for his positive demeanor, willingness to go to the dirty areas of the zone, and his blistering "one-time-ah" from the top of the dot.

The CR-V Hybrid’s 75.8 cubic feet of cargo volume is stuffed with brand new hockey equipment for her son. The greater Boston area is one of the most hockey-crazed regions in America. We’re also pretty fond of Hondas around here.

Honda has a 13-year relationship with the NHL, and is the Official Vehicle of the NHL and the NHL’s official automotive partner. As part of the longstanding relationship, Honda is a presenting partner of the NHL Winter Classic, NHL Stadium Series, NHL Heritage Classic and is the title sponsor of the NHL All-Star Game where a Honda vehicle is awarded to the MVP Player.

We wish to turn your attention to the video above in which David Pastrňák makes his virtual presentation of the vehicle.

The all-new for 2020 Honda CR-V Hybrid is an ideal vehicle for Bostonians. With all-wheel drive and a combined fuel economy of 38 MPG is the perfect hockey-parent vehicle for New England.