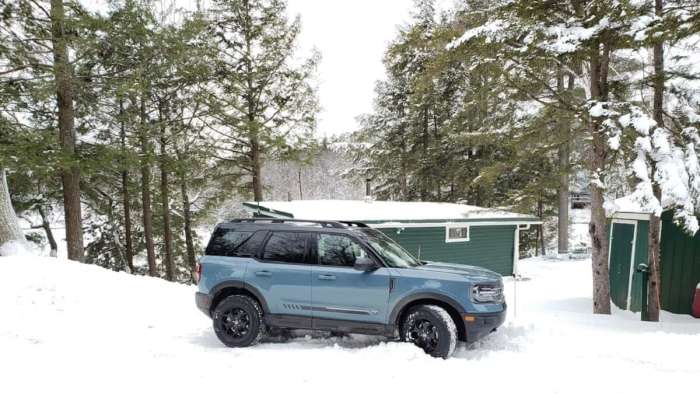 We examine the interior and exterior dimensions of the Ford Bronco Sport vs. the Bronco to clear up some misunderstandings about the size of these great SUV models.
Advertisement

The new Ford Bronco Sport and Bronco are two of the most exciting new SUVs on the market. We may even extend that statement to “three of the best” new SUVs, since the Bronco is available as either a two or a four-door SUV. We’ve been fortunate enough to test both the Bronco Sport and Bronco two-door for over a week at a time. We put them through the paces of normal driving, and will let the dedicated outdoorsy publications show you just how capable these rugged new SUVs are off-road. Let there be no doubt that both are among the best in their respective segments in many ways.

Size Is Relative
Size can be viewed in a number of ways. We would always prefer a vehicle be as large inside as possible and as small outside as possible. Particularly off-road, where external dimensions matter for maneuverability. The Bronco Sport is the best of the three with regard to compact exterior dimensions while offering a larger passenger space than the Bronco hardtops.

If you consider a greater height to be important in a vehicle, we simply don’t understand your viewpoint. It makes the vehicle less maneuverable and implies a higher center of gravity. Feel free to offer your thoughts on the size comparison of the (larger inside) Bronco Sport vs. the (smaller inside) Bronco in the comments below.