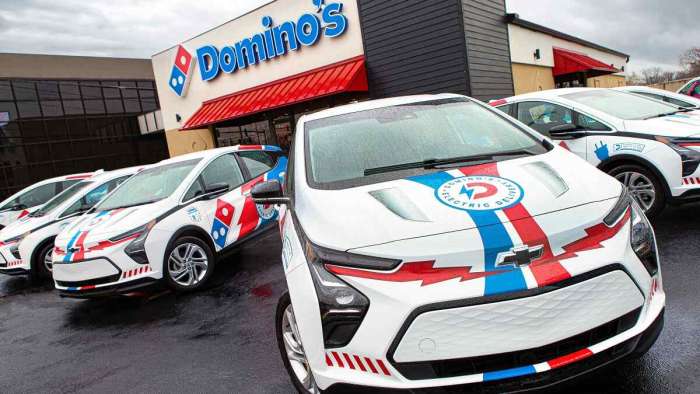 Your next pizza could arrive in one of the greenest vehicles built in America. Dominos has announced that over the coming months, it will add to its already existing fleet of electrified vehicles by adding 800 Chevy Bolts. This will give Dominos the title of the company with the largest electric pizza delivery fleet in the country. And Dominos doesn’t just use electric cars. Your favorite pizza may also be delivered by an employee using an electric bike or scooter.

“Domino’s launched pizza delivery in 1960 with a Volkswagen Beetle, rolled out the DXP – a custom-built pizza delivery vehicle – in 2015, tested autonomous pizza delivery with cars and robots, and is now leading the charge in the future of pizza delivery,” said Russell Weiner, Domino’s chief executive officer. “Domino’s has always been on the cutting edge of pizza delivery and electric delivery cars make sense as vehicle technology continues to evolve. We’ve made a commitment to net-zero carbon emissions by 2050, and this is one way we can begin reducing our environmental impact, one delivery at a time.”

Dominos envisions several advantages to using the Chevy Bolt, including ample battery life with the potential to have days of deliveries, zero tailpipe emissions, advanced safety features and lower average maintenance costs than nonelectric vehicles – all without the financial impact of high gas prices.

“We’re excited that Domino’s has chosen the Chevrolet Bolt EV to build their electric pizza delivery fleet in the U.S.,” said Ed Peper, vice president of GM Fleet. “Both companies are committed to bettering our environment. GM plans to eliminate tailpipe emissions from new U.S. light duty vehicles by 2035. With an affordable price, fun driving characteristics, and a 259-mile range, the Chevy Bolt EV is the future of Domino’s electrified deliveries.”

To help build awareness of its commitment to the environment, Dominos is going to give away two Chevy Bolts. To enter to win, visit the company's website.