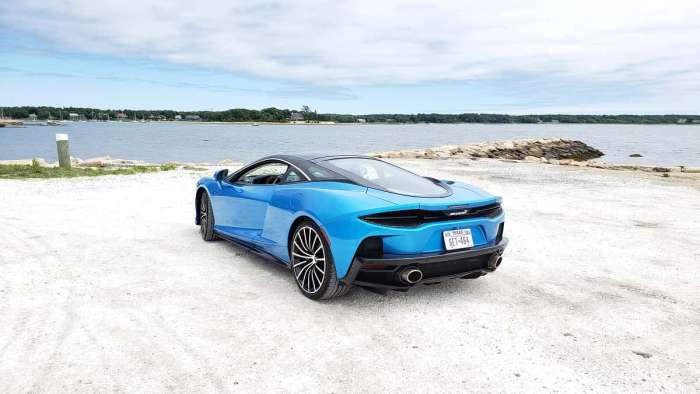 The new 2020 McLaren GT is an attractive combination of supercar performance and grand touring comfort. So what is this car like in the real world on an actual grand tour?
Advertisement

McLaren is an automotive brand that has built a reputation on performance. The brand offers a wide variety of street-legal track cars and supercars. Each is impressive, and each has a distinct personality. Entering the family for 2020 is the New GT, AKA the 2020 McLaren GT grand tourer. 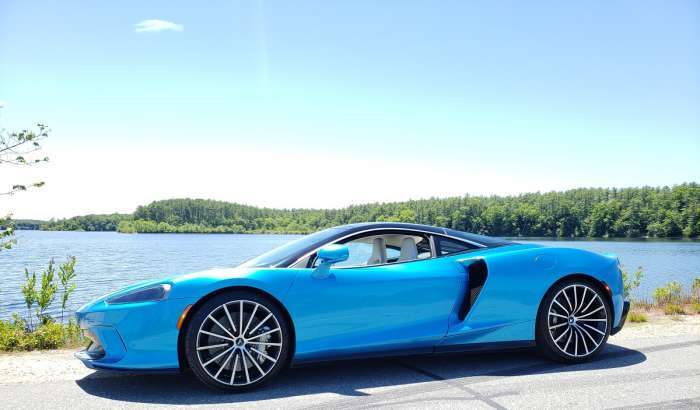 We were offered a fresh from the factory GT to test in our New England area and immediately planned our grand tour. Our route took us on some of the very best back roads and country roads in Southeast Massachusetts along the Atlantic seashore. Our goal was to find out how well this supercar preforms in the real world.

2020 McLaren GT - What Is a Grand Touring Car?
The answer became pretty clear to us over 24 hours of on-road, grand touring testing. The 2020 McLaren GT is a true GT car in the way that most enthusiasts use the term. To us, the term implies a few things. First, the touring part. That means the car is comfortable enough to be used on a long journey intended to be an enjoyable time. Long commutes are not tours. We would not prefer a grand touring car for a commuter car. Similarly, although any GT is a car that can be fun on a track, a GT needs to have more creature-comforts than a car built mainly for track days. 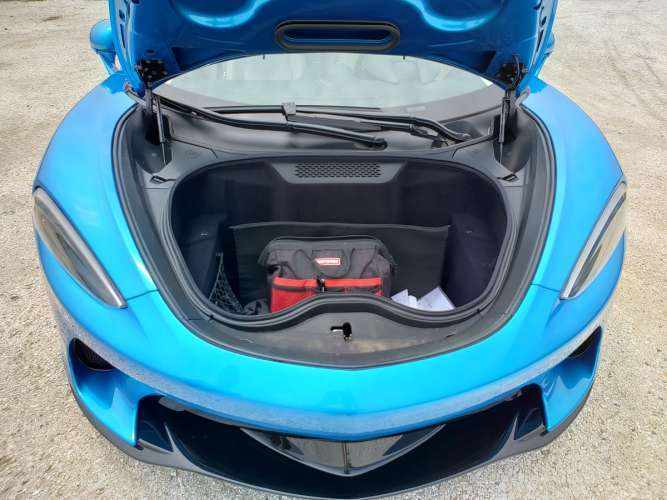 Touring also means the car is able to carry luggage. And here the McLaren GT shines. Its front trunk, or “frunk,” alone is a large enough space for two overnight bags and a small soft cooler. 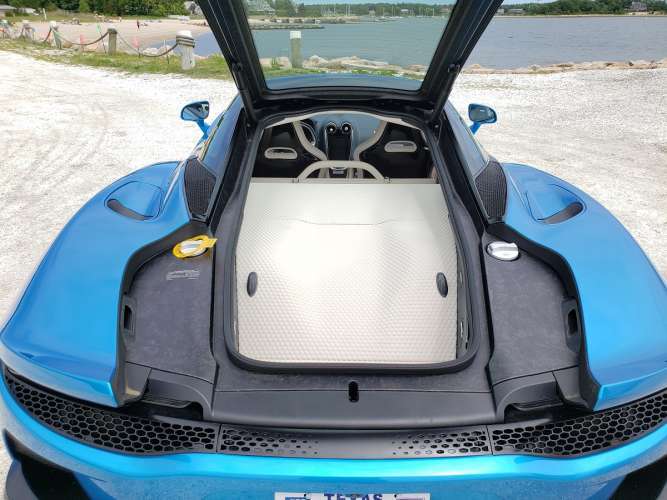 In addition, the rear hatch area has a very large space capable of carrying a lot more. This car could easily take a couple away for a long weekend or even a week of travel.

Let’s draw a sharp contrast to a great car that is not a GT. The Alfa Romeo 4C Spider. Is it a great car? Yes, and one of our favorites in certain situations. Do you want to take it on a 4-hour ride in the country? Maybe once. Never twice. It is not comfortable. Its cargo area is not adequate. So, not a GT.

The McLaren GT also has a great infotainment system - for a supercar. It has a very simple to learn and operate interface. No silly mouse to drive you crazy. You just touch it. There is a high-quality nav system and the gauge area is very well done. The menus are easy to operate and you can configure the car in just a few moments. You also have Bluetooth to connect your favorite apps. That means you can run Waze and get alerts to things like upcoming construction sites, disable vehicles on the shoulder, first responders assisting motorists ahead, and revenue generation stations (speed traps). Anyone who has owned a modern grand touring vehicle knows the value of these apps.

The interior of the McLaren GT is covered in premium leather pretty much everywhere leather could work. The tasteful and modern interior design is fantastic and makes the vehicle seem classy and cutting edge at the same time. Seat comfort is outstanding. 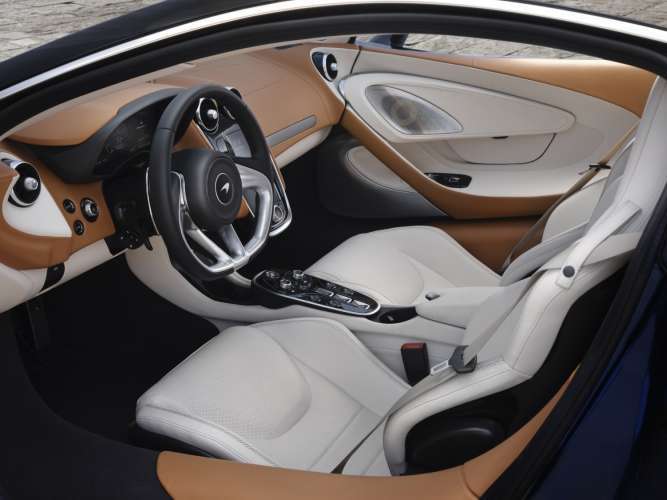 Too many sports cars we test have side bolsters that are uncomfortable. The McLaren GT’s seats are ideal for long drives. Between the two seats is an adequate center console for storing sunglasses and other items you need inside the vehicle. The interior of the McLaren GT is very user-friendly.

The ceiling of the McLaren GT features a magic glass that can darken or lighten at the touch of a swipe pad. We love natural light in the cabin, but on really hot days you need a break. The roof works wonderfully. Also, when you open up both of the large side windows in the GT there is zero “wubba wubba wubba” wind buffeting. You can cruise at 45 MPH this way, or on the highway at much higher speeds, and the interior is not disrupted by the airflow. You can’t enjoy driving this way in a new Toyota Supra for example. The McLaren GT is an ideal car to drive with the glass down and your left arm on the sill. 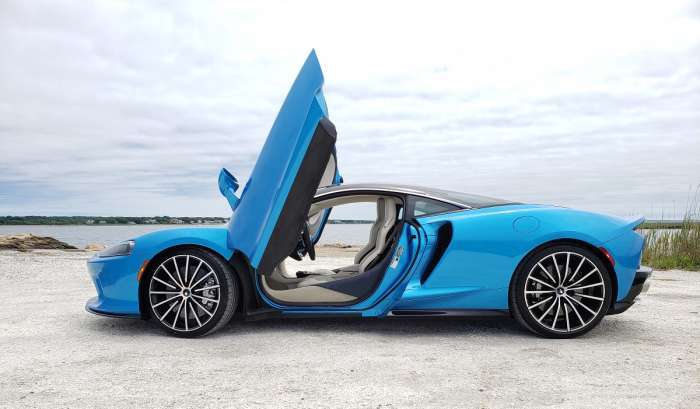 The Dihedral doors open up, not out. So you have the supercar wow factor that you really want. We found the doors to be simple to operate. The GT is much easier to enter and exit than the BMW i8, a vehicle with a similar look and mission.

The rear hatch opens via the fob or via buttons in the vehicle. The engine is not visible in the GT, something we feel adds a visual punch. On the other hand, the cabin is quieter than it would be were the engine covered in a clear thin sheet of polycarbonate. And the storage area is massive. Again, for a supercar. You could easily fit a golf bag or even a hockey bag in the back. The things you place inside are always visible, but we don’t expect owners to park a GT in public where trouble may start.

2020 McLaren GT - Drivetrain
The McLaren GT is rear-wheel drive and is a rear-mid-engine layout. This is fantastic for handling. The engine is a 4-liter, V8 with dual turbochargers. It develops 612 hp and 465 lb-ft of torque. The engine is coupled to a 7-speed dual-clutch automatic with paddle shifters. We feel this is an ideal transmission choice for such a car.

2020 McLaren GT - How Did We Drive It?
Our day of testing was all on public roads, so there was no way we could come even close to the limits of this vehicle. However, that is also true of the Honda Civic Si we tested just before it. Most modern sports cars have capabilities way beyond real-world usability.

The GT has launch control, which will help propel you and the GT to 60 MPH from a dead stop in about 3.2 seconds. In our part of the world, there is no place in which to do that legally. Just like the 203 MPH top speed can’t be tested. Frankly, we are pretty sure there isn’t even a track near us that would be long enough to test that top speed. So the limits are all theoretical in such a supercar.

That said, you can certainly appreciate 612 hp when you have some running room to toe the throttle. The GT in Comfort Mode always has a fantastic and immediate response to any input. The acceleration builds. We’ve begun to benchmark top street performance against cars like the Jaguar I-Pace. The instant torque from an electric drive system is addictive. You don’t miss it in this liquid-fueled vehicle. The acceleration is exciting, and you cannot use even half the car’s potential on public roads.

Handling is super sharp, and the steering feel is ideal for grand touring. You can place the GT precisely on the road, and turn-in is satisfying, even for such a long car. With its excellent sight-lines, the world becomes your view ahead, and the GT can transform any decent back road into your own version of grand touring perfection. Unlike many of the grand touring vehicles we have tested, the McLaren GT has no blind spots.

The brakes are interesting. Massive iron disks slowed by huge calipers would look to be “grabby,” but they are not, Our tester had only 500 miles on the odometer so the brakes may still be settling in. Braking required a very firm push on the pedal. However, brake feel and modulation were outstanding. You just need to be prepared to actively be involved in the braking. The sadly too common sense of “over-power” in the brakes is largely absent. We suspect this will please nearly every McLaren shopper.

With a curb weight of around 3,300 pounds, the GT feels light on its feet, despite its long and wide stance. It is not tossable like a modern NC or ND Miata (also a mid-engine car), but it does feel fun in tight turns. We hope to test the McLaren GT on a track this fall and will report the car’s feel closer to the limits if that comes to pass. 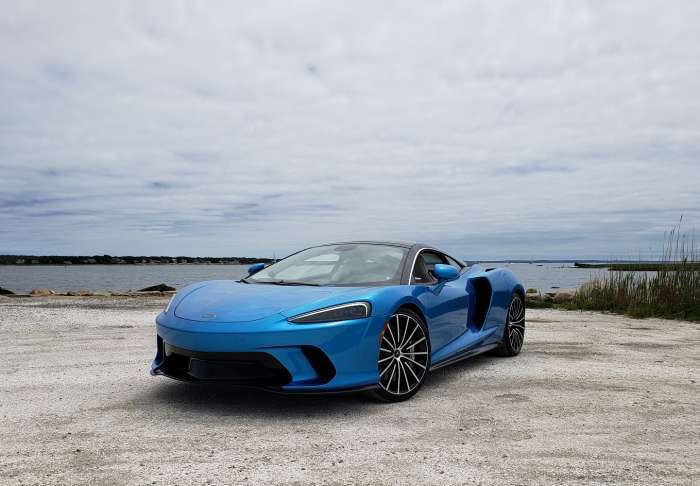 2020 McLaren GT Price
Our McLaren GT tester had an as-tested price of $263,265. You be the judge if that is a good value, or if value is even an important metric for a supercar. It is not lost on us that the new Chevrolet Corvette has similar performance, a similar layout, a similar mission and will cost half this amount with every available option. The BMW i8 also begs for comparison as a GT car, though its performance is not quite on par.

McLaren GT - What Would We Change?
So what would we like to see in a GT that the new McLaren GT does not offer a buyer? Not much. We do like an open-air option. A retractable hardtop or removable and stowable hardtop would be a tempting choice. We are also of the opinion that wireless Android Auto and Apple CarPlay has real value when touring the countryside. Maybe we are just looking for something to ask for when in fact, the car is already perfect? You can make that call based on your wishlist.

2020 McLaren GT - Our Conclusion
McLaren’s new 2020 GT is a grand touring vehicle with ample luxury. We found it ranks alongside the Audi R8 V10 and Maserati GranTurismo as the best vehicles for this mission we have tested overall. It offers outstanding driving enjoyment, comfort that is required for long trips, and the McLaren GT has a powerful visual impact that every supercar must have to be in the club.

John Goreham is a life-long car nut and recovering engineer. For 20 years he applied his engineering and sales talents in the high tech world. Now he tests supercars, sports cars, trucks, crossovers, and daily drivers on public roads and racetracks. In addition to Torque News, John's work has appeared in print in dozens of American newspapers and he provides reviews to many vehicle shopping sites. You can follow John on Twitter, and view his credentials at Linkedin

DeanMcManis wrote on June 24, 2020 - 3:07am Permalink
It looks great. Nice video review too. I love this color. McLaren builds fantastic high performance cars, but it's not how I would spend $263K on a performance car. Then again I would have a hard time spending anything over $100K on ANY high performance car. But that's just me. Still, I would love to get a McLaren to test drive, and I'd even do a nice video and written review too. Where do I sign up?
John Goreham wrote on June 24, 2020 - 1:03pm Permalink
You are halfway there! It was about 3 years into my auto writing when I was offered my first test car. A used Camry. Yup. Used.