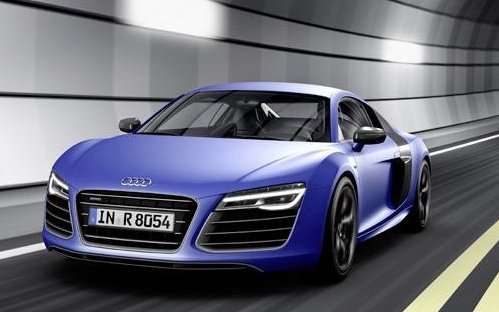 Near perfect Audi R8 gets even better

The main issue is now fixed and the car improves in many small ways.
Advertisement

This author has had the pleasure of driving some of the world’s finest automobiles, but his time in the Audi R8 V10 Spyder stands out as his favorite drive in any car. The fact is that the Audi R8 V10 Spyder (which means convertible) with the manual transmission is/was pretty much the perfect 2-door super car. Insanely fast, incredibly responsive, fun, classy, high quality, make that extremely high quality, and frankly a good deal price-wise. However, there were issues with the automatic transmission and the coupe version (hard-top) was not the same experience. For 2013 Audi has made some changes and we would like to list those here in order of importance for our readers.

Audi R8 S-Tronic Transmission
In its recent press release, Audi goes on and on and on about the changes to the LED headlights. There was nothing wrong with the headlights in the R8. They were wonderful. Not one person ever made a negative comment about them. Waaaay down in the press statement Audi finally gets around to mentioning that unlike the 2012 and earlier models, the automatic transmission is now going to be a dual-clutch “S-Tronic” transmission. It used to be a single clutch “R-Tronic” transmission. We at Torque News employ mechanical engineers who can write 1000 words explaining the difference between these two Audi transmissions, but here is what the summary is from the auto-press world; Old R-Tronic = bad. New S-Tronic = good. People did not like the R-Tronic. Since it is a part of the past, let’s not dwell on it. People love the S-Tronic transmission. Here is Audi’s explanation of how the S-Tronic works. We could rewrite this, but it cannot be improved; “The new 7-speed S tronic, with a three-shaft layout, is less than 23.62 inches in length. Two multi-plate clutches lying behind one another (a new feature), serve two mutually independent sub-transmissions; gears are shifted directly as the clutches alternately open and close. Gearshifting occurs practically without interruption of tractive power within hundredths of a second, and so dynamically, smoothly and comfortably as to be hardly noticeable.” In translation what this means is that when you gun this car, there is no loss of power during upshifts. That makes the car faster and more enjoyable.

Audi Gated Manual Transmission
If you have not driven a car with a gated shifter as good as this Audi you should add it to your bucket list. The gate allows the driver to move into the proper gear more reliably. That can be a good thing when you are shifting a mid-engine, topless, rocket ship with 550 HP at the redline. If you try to shift up from fourth to fifth and instead you get third it is not the same as doing it in a Miata. In the Miata the engine will cut the spark and it will make bad noises. You then drive on. In the R8 if you do this you will be travelling at trip digit speeds. The best outcome is you buy new pants. The worst outcome is you ruin the car. In between those two is you die, which is not as bad as ruining the car.
The gated shifter in the R8 is so wonderful it even looks great. The look is of a medical instrument. Polished for function, not fashion. When you move it from gear to gear it snicks in a way that makes you tingle. You feel like you are moving the most expensive thing on the planet and it wants you to move it. The clutch is perfect. Not stiff like a muscle car and certainly not soft like a pocket-rocket. It is just right, like the porridge in the 3 Bears.

R8 Engine Choices - R8 Body Choices
It really doesn’t matter which engine you choose in your R8. They are both wonderful. However, if you do choose the smaller V8 every single time you tell anyone you have an R8 they will ask you “Did you get the V10?” If you say anything but yes they will not like you anymore. Why buy the V10 instead of the V8? The V10 has two more and every guy wants two more, so there it is. The body of the R8 comes two ways. You can choose the coolest drop top made in Germany that is an incredible, mind-blowing blast to drive. The sounds, the smells, the vibrations, the wind tussling your hair, (if you have hair, or hairpiece, or scalp if you don’t) are simply awe inspiring in the R8 Spyder convertible. Or you can buy the coupe. The coupe feels just like Audi TT Coupe except it costs about $100,000 more. The driving sensation is about the same. Your choice.

R8 Other Changes and Summary
The 2013 R8 changes in many other ways. The lights get cooler. There are trim changes. The grill is a bit different. If you care about this stuff Audi has a website you can visit. None of it matters. The R8 was nearly perfect and with the new automatic it may actually be perfect.