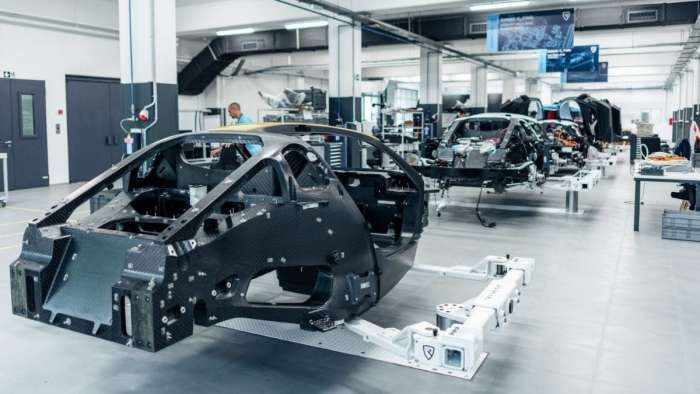 Carbon Fiber: A Layman's Guide To The Miracle Material

Carbon fiber. Touted as the miracle lightweight material and used extensively by the likes of Pagani, Koenigsegg, Bugatti, and Croatia’s EV rockstar Rimac, we can almost gauge how high-end and expensive a car is by how much carbon fiber they use. So, what’s the deal? Are they better than metals?
Advertisement

Perhaps we should start with the basic question. What is carbon fiber? Well, as the name implies, it is a fiber strand made of carbon. Very strong when pulled. Sort of like a super string. By itself, that property only lends to very limited use, but when weaved in certain patterns, it can be made strong in certain directions. That's in cloth form, so still somewhat flimsy.

The magic happens when it's combined with epoxy resin. Epoxy is stiff, very strong when compressed, but quite brittle and not so strong when pulled. So together, they are very light, stiff, and strong in many directions. This combination is called CFRP (Carbon Fiber Reinforced Plastic) or Carbon Fiber Composite.

In applications where we need a moving structure, such as transportation vehicles (land, water, air, and space), strength-to-weight ratio is the name of the game. And in that game, Carbon Fiber Composite is currently among the best players.

The aerospace industry has been an early adopter to the material, with a major milestone in the automotive world being Formula One's 1981 McLaren MP4/1, the first car with a carbon fiber monocoque chassis. It was competitive, winning races in its first year. And perhaps more importantly, if done properly it proved to be very safe, as shown when driver John Watson climbed out of the car and walked away after a 140 mph crash in Monza, Italy.

That’s a dedicated race car. What about road cars? That came a decade later, in the form of the legendary McLaren F1 road car. With carbon fiber monocoque chassis, BMW-sourced bespoke V12 engine, tier-1 supporting materials, and motorsports-bred ingenuity, Gordon Murray (of the recent GMA T.50 fame) designed this car to be the ultimate driver's car. Incidentally, it also became the Fastest Production Car record holder for over a decade, before being topped by the Bugatti Veyron in 2005. To this day, it is still the fastest production car with a naturally aspirated engine.

So, pretty impressive stuff. But if carbon fiber's so great, why isn't it used in everything?

First major hurdle : Cost. Both in materials and in fabrications.

You see, creating the carbon fiber strands took some complicated process, especially ones with the properties we're after. Then there's the weaving. To get the best results, these tiny strands needed to be weaved into tight, precise cloth with specific patterns. The cloth was then arranged in layers on the mold, mixed with epoxy resin, and baked in an oven. Ideally a pressurized oven.
So, a complicated and labor-intensive process, therefore unsuited for mass-production.

Another important issue is directional strength.

A metal plate with certain material and thickness would have fairly uniform strength everywhere, and in any direction. The same thing with carbon fiber composite could potentially have different strength in different directions, depending on how the cloth was laid up. As we can imagine, this brings a lot more variables when designing complex structures, with potentially catastrophic results. However, this directional strength characteristics could also be an advantage, when exploited properly by knowledgeable and creative engineers.

The third issue is heat.

Carbon, by nature, is very resistant to heat. Carbon fiber composite, on the other hand, contains epoxy, which drops its stiffness at elevated temperature. So usage of such material in a structural capacity needs to take this into account.

Utilized properly, carbon fiber can provide a substantial advantage, but usually only feasible on high-end low-volume products. Something BMW was trying to change by cooperating with SGL Group, a carbon specialist company, in a joint venture and building a carbon fiber strand manufacturing facility in Moses Lake, WA. The results of this joint venture could be seen in the carbon fiber Life Module Chassis of the i3 and i8. In 2014, BMW released the i3 with a kerb weight under 2800 lb, partly thanks to this technology.

Carbon fiber composite construction is a rapidly developing technology, and it is entirely possible that we will see it applied more on mainstream vehicles in the near future.