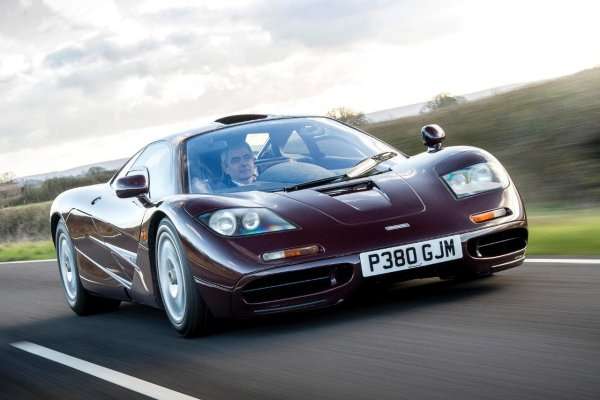 A clean, one owner with just 41,000 miles on it and a couple of boo-boos in the past is being put up for sale by Rowan Atkinson, best known as "Mr. Bean," for a cool twelve mil.
Advertisement

It's difficult to imagine a more storied British supercar than the McLaren F1. Built in the mid-1990s as one of the most powerful road-legal supercars of the era, it captured imaginations and immediately became a poster in most European boys' rooms. At that time, actor Rowan Atkinson was at the pinnacle of his career, starring in the television show Mr. Bean on British TV. Some might consider it unlikely, but Atkinson and the F1 were to become lovers.

You see, the Bean actor is a serious performance car junkie. The pasty-faced, unassuming Atkinson loves pushing a powerful car to its limits. So he purchased a 1997 McLaren F1 and proceeded to drive the hell out of it.

Two wrecks and millions in repairs later, the 1997 F1 is still a clean one owner car with 41,000 loving miles on it and was the actor's daily driver almost since the day he purchased it. Now, Atkinson is ready to part with his beloved F1 and move on to other things. He semi-secretly has a revolving stable of supercars to choose from, as he told Top Gear's Jeremy Clarkson a couple of years back. Outside of this F1, Atkinson has rarely owned a car for long, preferring to drive interesting vehicles and then trade them off for another.

When new, the 1997 McLaren F1 sold for about three quarters of a million dollars (American) and, not surprisingly, there were only 64 of these bad boys made before McLaren pulled the plug and moved on to their next model, the MP4. Their value has only gone up since then, though Mr. Bean's F1 may be the only one that wasn't ferreted away into a garage to be stared at, occasionally dusted, and never driven.

Now, the car is possibly worth tens of millions. Mr. Bean's ownership doesn't hurt value, of course, but the fact that it's a rare car that broaches exclusivity easily, though, is another factor. These supercars are rarely seen up for grabs and luxury sellers Taylor & Crawley of London are pushing to almost $12 million (USD).

In an interview with The Telegraph, Atkinson fondly refers to the car as his favorite daily driver, but says that "the time is right" to sell as he doesn't give it the attention he used to. The car, says Atkinson, "was never bought as an investment. I bought it for the quality of the thinking that went into its design.. it is time for it to be enjoyed by someone else."