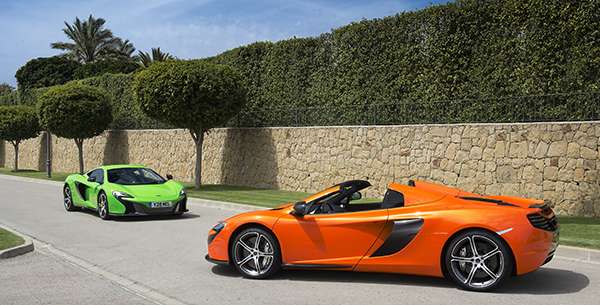 The internet was in a tizzy this morning when a report came out that Apple was in talks with McLaren about a possible takeover. But the dream of this fizzed away when only a few hours later, McLaren said they were not in talks with the technology company.
Advertisement

What's the story behind this rumor? What would Apple want from McLaren? We're going to try to answer these questions.

Genesis of the Rumor

The Financial Times (Subscription Required) reported this morning that the two companies had been in talks for the past few months of a possible takeover or strategic investment. According to sources, the deal was valued between $1.3 to $1.95 billion. This afternoon, a McLaren spokesman told Mashable in a statement, "We can confirm that McLaren is not in discussion with Apple in respect of any potential investment."

This cuts out the possibility of a large investment. But some outlets are reading between the lines of this statement, saying it doesn't rule out an acquisition.

Despite the denial by McLaren, the FT is standing behind their original report according to one of the reporters who worked on the story.

"Obviously we stand by our story despite McLaren's statement," said Tim Bradshaw on Twitter.

What would Apple want with McLaren?

To fully understand this, we need to dive into a long-standing rumor that it is in the automotive and technology, the supposed Apple car.

For the past two years, rumors have been flying around that Apple is working on their own autonomous vehicle. Codenamed 'Project Titan', Apple has been nabbing engineers from various automotive companies such as Diamler and Tesla, along with employees at Apple. But in a New York Times' report from earlier this month said Apple was rethinking its plans and laid-off a number of workers. The new plan according to the report said Apple would work on the underlying technology for autonomous vehicles.

Now back to the original question at hand. McLaren is well known in the automotive industry for manufacturing lightweight materials such as aluminum and carbon-fiber; on-board computer systems, and offering engineering services to automakers. The first two items would be of great interest to Apple.

Do you think there is more to the story or is this it?

At the moment, it is tough to say. We think that there isn't anymore to the Apple and McLaren story. But there is a little part of ourselves that believes there is. We'll be watching to see if there anything new.

LG's New EV Battery Plant Is a Welcome News for Tesla
Tesla Giga Berlin's New Hurdle: It's Not Only the Gov't, but Now Tesla Itself
END_OF_DOCUMENT_TOKEN_TO_BE_REPLACED