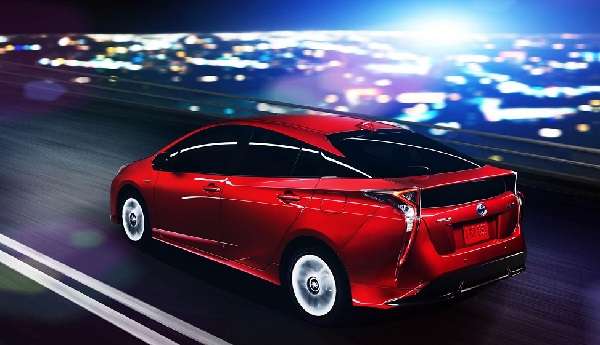 In some key markets, Toyota Prius is already less expensive. Here is why the new Prius will remain competitive.
Advertisement

The 2016 Toyota Prius is almost ready for sale. Although Toyota has not yet released official MPG estimates, the fuel economy of the 2016 Prius is easy to calculate. With the outgoing model having a 50 MPG rating, and Toyota promising a 10% increase in miles per gallon, the new vehicle will come in right around 55 MPG. Toyota promises an even more frugal Eco Prius will join the lineup. This means that the Prius will continue to be one of the lowest cost per mile vehicles to operate in the U.S. market.

2016 Toyota Prius – Cost Per Mile Calculator
Determining the cost per mile for fuel is easy. Simply divide the cost of gasoline per gallon by the MPG of the vehicle. AAA lists the daily average of gasoline in the U.S. market, and also by state. Today’s average is $2.29. Using this cost and the projected MPG of 55, the cost per mile for fuel of the upcoming Prius is projected to be about 4.2 cents per mile. In some target markets for EVs where the cost for electricity is high, for example, Massachusetts, the Prius cost per mile is lower than the cost to charge and run an electric vehicle.

EV Cost Per Mile Calculator
To calculate the cost of energy for an EV in cents per mile simply multiply the cost in cents per kWh the supplier charges times the energy used in kWh per mile of the vehicle. The EPA’s website, Fueleconomy.org, lists the kWh/mile of every EV. For the 2015 Nissan Leaf (2016 not yet listed) that number is 0.3 kWh/mile according to EPA. So for example, if the cost of electricity is 14.91 cents per kWh (as it was in Mass. the day this was written), the cost to operate the Leaf is 4.5 cents. Running the same numbers using California's average cost of gas (2.92 per gallon) and electricity (15.34 per kWh), has the Prius at 5.3 cents per mile and the Leaf at 4.6 cents per mile. Both the Leaf and Prius cost about $65 per month for energy for owners who drive 15,000 miles per year (41 miles per day).

2016 Toyota Prius – Low Cost of Ownership
There are other factors to consider concerning total cost of ownership of a vehicle. For example, the maintenance cost. The Prius has two key advantages here. First, like all Toyotas, the first two years are free to the owner and included in the car’s price. Second, the Prius has traditionally not used a timing belt that requires changing. Rather, the Prius has used a timing chain. If that continues, the Prius will remain one of the least expensive green vehicles to maintain in the U.S. market. Like EVs, The Prius also uses regenerative braking, which some say reduces brake-wear. Like all modern vehicles, the Prius also has no power steering fluid to change. Finally, the Prius has used relatively conventional tires that are made in very high volume, keeping replacement costs low.

2016 Prius – Value Retention
The Prius is the top green car in terms of value retention. Its value retention is rated about 40% higher than electric vehicles like the Leaf and Volt by NADA. Although government subsidies to EVs make the Prius more expensive to purchase than some popular EV green cars, the Prius’ much higher resale and trade-in value makes it cost competitive with electric models.

Patrick Rall wrote on October 9, 2015 - 2:48pm Permalink
Impossible. Nothing challenges EVs, ever.
Ricegf wrote on October 10, 2015 - 10:41pm Permalink
A key advantage of the Prius over EVs is that it uses a timing chain? Why is a timing chain an advantage? EVs have about a tenth of the moving parts of a gas vehicle, including no timing chain OR belt. Advantage: EVs.
John Goreham wrote on October 12, 2015 - 11:15am Permalink
It is germane to the story because the timing belt service is the single largest cost to maintain most ICE cars over its life. Since the Prius does not require that service, a person trying to calculate the cost of maintenance might want to know that. The only added cost to maintain a Prius compared to a Leaf are annual oil changes and a CVT fluid change every two or three years. The first two years of which are included in the car's price. Compared to a Volt, the Prius would be about the same (since the Volt also has a gasoline engine and a transmission of sorts). BTW, you can read here what Tesla suggests for Model S maintenance over four years, and what the company charges for it ($1,900). http://www.teslamotors.com/support/service-plans#/service-plans The BMW i3 includes everything for the first four years.
ricegf wrote on October 12, 2015 - 11:59am Permalink
"The only added cost to maintain a Prius compared to a Leaf are annual oil changes and a CVT fluid change every two or three years." I'm not trying to attack the Prius here, but that statement simply isn't accurate. You're omitting emission tests during state inspections, obviously, which are waived for the Leaf. Also, per the Prius Scheduled Maintenance Guide, you're omitting checks or replacement of the fuel filter, engine air filter, front differential oil, fuel system, fuel cap seal, radiator engine coolant, and exhaust pipes and mountings. That will get you to 50k miles, or about 4 years of service. Per the Leaf Service and Maintenance Guide, the only maintenance check required by a Leaf but not a Prius is the charging port cover. That gets you to 52,500 miles. I omitted items such as brakes and cabin air filters that also apply to both vehicles. No question that the Prius is a nice car with green cred. But no need to exaggerate by claiming the maintenance is as low as an EV.
John Goreham wrote on October 12, 2015 - 12:51pm Permalink
In my state, MA, one of the 12 that adopted the CARB mandates, the Leaf and other EVs are not exempt from annual state "Inspections." Good points about the air and fuel filters. Pretty sure the coolant for all ICE cars is now a one-time change near 100K.
Jesse wrote on October 11, 2015 - 10:36am Permalink
Your comparison for fuel costs is mostly accurate (although I have yet to get less than 4miles/kWh in either of my Leafs, but our 2014 Prius never gets better than 45MPG). However, your "advantages" for the Prius on maintenance is complete rubbish. My total cost of maintenance for my 2011 Leaf (leased for 3 years) was the cost of changing the windshield wiper blades and rotating the tires. I haven't had ANY maintenance costs yet for my 2014 Leaf. The things you cite as advantages for the Prius are even bigger advantages for EVs (fewer moving parts than the Prius, even better regenerative braking). So, yeah, a Prius is cheaper to own than pretty much any other non-EV, and it's likely on par with plug-in Hybrids (including the Volt), but EV's are even cheaper to maintain.
John Goreham wrote on October 12, 2015 - 11:07am Permalink
So what were your costs over the three years? What did you pay for the tire rotation in years one and two? Did you skip the two brake fluid changes at 15K intervals, or has Nissan added those to the cost of the your year Leaf? A Prius owner pays zero in years one and two. What would you guesstimate the Prius' maintenance cost would be in the third year? My story lays out the case that the Prius has about the same maintenance costs over the period you have owned your EV. How is that rubbish? Here is what Consumer Reports paid, about $600, to maintain a Nissan Leaf similar to your '11 in its first two years. They did exactly as the manufacturer recommended in the owner's manual: http://www.consumerreports.org/cro/news/2011/07/zen-and-the-art-of-nissan-leaf-maintenance/index.htm
Jesse Spears wrote on October 18, 2015 - 11:52am Permalink
I can only tell you about our experience. We're on our 3rd Prius, and 2nd Leaf. Both models need tire rotation at the same rate (covered by dealers in both cases for the first 2 years). If there was a charge for brake fluid on my Leaf, the dealer absorbed it. There was no charge for anything on my 2011 Leaf until the 30k service, and that was minimal (about the cost of an oil change for the Prius). Other than that I paid for windshield wipers. This was a lease, so it's possible a lot of the costs were covered because of that? Don't get me wrong...the 2007 and 2014 Priuses have been very reliable, and cheap to own vs. any other gas car I've owned (the 2002, not so much). But the Leafs have been cheaper. Maybe that would be different if I purchased one and hung on to it for 7 years, but I leased the first two because of possible battery degradation (the warranty only guarantees no more than 70% capacity loss, and I need closer to 80% for a minimum). For the 2011 that turned out to be a wise choice (battery degraded fairly quickly, likely because of record heat in the first summer). So far, the 2014 seems to be holding up well (still haven't lost the first bar at over 16 months, including two summers).
John Goreham wrote on January 15, 2016 - 3:07pm Permalink
Thanks Jesse. Great information.