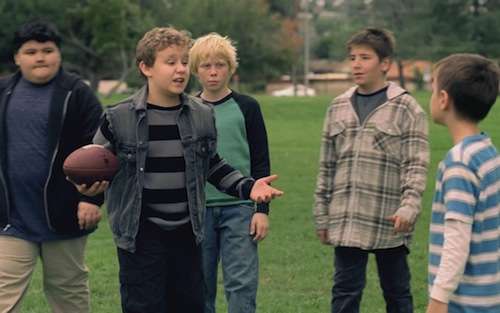 Having already unveiled commercials for the Hyundai Sonata and Genesis, Hyundai has just released its third and most interesting Super Bowl XLVII ad showcasing the all-new Santa Fe.
Advertisement

Just days after Hyundai revealed a pair of Super Bowl commercials for the Hyundai Genesis and Sonata Turbo, the automaker has just unveiled its third and final Big Game ad. While the previous two commercials were effective, Hyundai’s latest will likely have the biggest impact when it airs during this weekend’s Super Bowl.

One of the cleverest spots previewed by any automaker so far, Hyundai’s “Team” ad features a youngster getting bullied by a group of young men while playing football. The bully then challenges his victim to come back with a team for a game of football. What the unsuspecting bully doesn’t know is that the hero’s mom just so happens to drive an all-new Hyundai Santa Fe, which comfortably seats seven passengers.

The amusing ad then chronicles the young man rounding up his super team of friends. This rag tag team includes a pair of weightlifters, a welder, a bear wrestler and a youth that has just carried a man out of a burning building. Upon arrival, the bully asks his challengers “touch or tackle?” to which they respond, “tackle” in unison. Hyundai’s innovative Super Bowl commercial also features Quiet Riot’s metal classic “Bang Your Head.”

Although most automakers will be partaking in Super Bowl XLVII advertising, most car brands will not have as large of a presence as Hyundai. Rather than opting for a single 60 or 90-second ad, Hyundai is choosing to air two 30-second ads and the 47-second “Team” TV spot. One of the automaker’s previously released ads features the Hyundai Sonata Turbo encountering a series of roadblocks including a large biker wearing leopard print underwear, a drooling dog, a tanker filled with hazardous waste and a horse carrier. Essentially, these are roadblocks that the typical motorist doesn’t want to drive behind. Luckily, the Sonata Turbo’s 274-hp engine makes passing such obstacles a breeze.

Hyundai’s second commercial shows the Hyundai Genesis driving around a racetrack while a Sport Center-esque narration plays in the background. The narrator uses typical sports catch phrases like “down the sideline” and “bringing the ruckus” all to describe the Genesis. The string of amusing slogans ceases once Hyundai spokesman Jeff Bridges clears his through and apologizes for getting carried away. Aside from the use of catch phrases, Hyundai’s ad team effectively utilizes a series of screen captions comparing the Genesis to vehicles in its class like the BMW 550i, Mercedes-Benz E550 and Porsche Panamera S. In each case, the Hyundai Genesis tops each luxury rival in categories like horsepower and 0-60 speed.

So what’s the cost of three ads? Hyundai likely spent upwards $11.4 million, because the average 30-second spot was selling for about $3.8 million. Hyundai’s current strategy is similar to last year’s Super Bowl when the automaker purchased several chunks of ad space throughout the game. Last year’s ads included the popular “Rocky”-themed spot and a commercial featuring a cheetah racing against the Hyundai Veloster.

LG's New EV Battery Plant Is a Welcome News for Tesla
Tesla Giga Berlin's New Hurdle: It's Not Only the Gov't, but Now Tesla Itself
END_OF_DOCUMENT_TOKEN_TO_BE_REPLACED