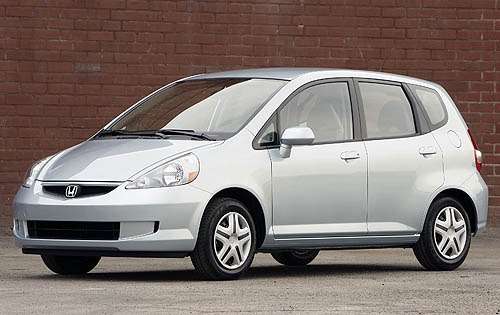 Honda has announced it will once again recall 2007-2008 Fit vehicles -- covered under a previous recall -- to address potential fire risks.
Advertisement

Affected by the recall are about 685,000 model year 2007-2008 Honda Fit hatchbacks, which were previously recalled in 2010. The vehicles in question may contain a faulty master electrical switch, which may short circuit when wet. As a result, the unit may overheat and catch fire. According to the National Highway Traffic Safety Administration, the repairs used in the earlier recall may have been inadequate.

The recall covers 686,298 Honda Fit vehicles (also known as Jazz overseas) sold in 57 countries, including 143,000 in the United States. No accidents or injuries have been reported in regard to the current recall.

That being said, Honda North America received seven reports of short-circuited switches prior to the 2010 recall, five of which melted and two that caused fires within the door. There was also one fire-related death in South Africa.

Honda recalled the same vehicles in 2010, but has since determined that its initial repair procedure did not ensure that the problematic switches would be completely sealed from moisture. The automaker arrived at this conclusion through internal testing and not due to customer complaints.

Honda will notify owners of the recall beginning next month. In order to ensure that all vehicles are repaired, authorized dealers will inspect and replace damaged switches first, and replace undamaged switches at a later date. The automaker expects to have sufficient supplies to fix undamaged switched by Fall 2013. In the meantime, Honda Fit customers may contact Honda at 1-800-999-1009. Honda’s recall number is JA6. Concerned drivers may also contact the National Highway Traffic Safety Administration’s Vehicle Safety Hotline at 1-888-327-4236 or go to www.safercar.gov. The NHTSA campaign number is 13V260000.

Note: Honda is advising all 2007-2008 Honda Fit owners to park their vehicles outside until it is examined by an authorized dealer.

Honda issued a nearly identical recall last year involving 268,000 model year 2002-2006 Honda CR-V crossover SUVs. According to the NHTSA, certain CR-V vehicles contained faulty power window switches, which may overheat when in presence of moisture (typically rain). There were four fires reported in relation to the problem, but no injuries or crashes.Click HERE to read Torque News' coverage of the Honda CR-V door fire recall.

Earlier this year, Honda recalled 46,000 model year 2012-2013 Honda Fit Sport hatchbacks because of a defective electronic stability control system (ESC), which may allow for excessive rotation. Consequently, the vehicle may tilt too far before the ESC applies the brake. For more information about the Honda Fit ESC recall, click HERE.

LG's New EV Battery Plant Is a Welcome News for Tesla
Tesla Giga Berlin's New Hurdle: It's Not Only the Gov't, but Now Tesla Itself
END_OF_DOCUMENT_TOKEN_TO_BE_REPLACED