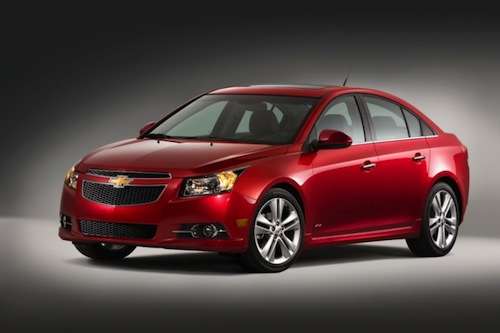 GM stops deliveries of 60k 2013 vehicles due to OnStar glitch

General Motors has delayed the sale of various 2013 models due to a software problem pertaining to their OnStar communication system. The issue affects 60,000 vehicles on dealer lots nationwide. The affected vehicles are the 2013 Chevrolet Cruz, Equinox and Volt; the Cadillac XTS and ATS; the Buick Verano and the GMC Terrain. In addition to the multiple 2013 vehicles concerned, the 2012 Cadillac SRX is also involved.

The aforementioned software glitch impedes OnStar’s crash notification system from alerting the OnStar call center in the event of a crash that does not trigger airbag deployment. The software problem does not pertain to more serious accidents that activate airbag deployment.

That being said, the error does not prevent airbag deployment from occurring. Additionally, the software hiccup does not hinder the operation of the OnStar emergency button.

GM spokesman Alan Adler told Automotive News that the problem should be fixed by next week. Some vehicles have already been fixed through a remote software upgrade program, but this method has not prove successful for all vehicles. As a result, GM has requested that dealers fix the remaining models via a manual upgrading system.

According to Adler, GM discovered the defect during a crash test. Although the current stop-delivery order affects vehicles that have not left the lot, GM reports that a communications error also affected vehicles in owner possession last month. GM notified owners of the defect in August and fixed most models remotely.

Unfortunately for GM, the new delay comes just as the automaker was set to begin selling the 2013 Cadillac ATS. The stop-delivery may hurt initial sales of the vehicle, which Cadillac has been heavily promoting for months via its “Cadillac vs. the World” campaign. The high profile ad spot made its television debut during the opening ceremony of the 2012 Olympics.

Aside from the ATS, perennial favorites like the Chevy Cruze and Equinox may also be negatively impacted. Equinox is currently GM’s best-selling crossover, while the Cruze is the automaker’s best-selling car behind the Malibu. In fact, the Cruze was the most popular compact vehicle in August with 25,975 units sold.

In other OnStar news, GM announced earlier this week that it would be expanding its integrated communication services in Chevrolet, Buick, GMC and Cadillac vehicles sold in Mexico in 2013. Mexico joins the United States, Canada and China as countries where OnStar services are currently available.

Skip wrote on September 9, 2012 - 10:51am Permalink
My XTS arrived at the dealer Wednesday September 5, 2012. I was scheduled to take possession Friday September 7, 2012. The stop delivery was issued Thursday September 6, 2012. If GM knew of this problem in August as stated in the article: "According to Adler, GM discovered the defect during a crash test. Although the current stop-delivery order affects vehicles that have not left the lot, GM reports that a communications error also affected vehicles in owner possession last month. GM notified owners of the defect in August and fixed most models remotely;" WHY IS IT THAT MY NEW VEHICLE WAS NOT AND IS NOT AVAILABLE FOR DELIVERY SINCE THE DEFECT WAS DISCOVERED IN AUGUST? My dealer suffers as well because of the inability to close deals. The trickle down affects my salesperson's receipt of commission possibly voiding a month's bonus. GM certainly is not being responsible in servicing customer's orconcern about remuneration for salespeople and dealers. None of the lot impounded vehicles should have left the factory without the corrective fix. Are there statutes relevant to this issue? I hope my attorney finds one!!!