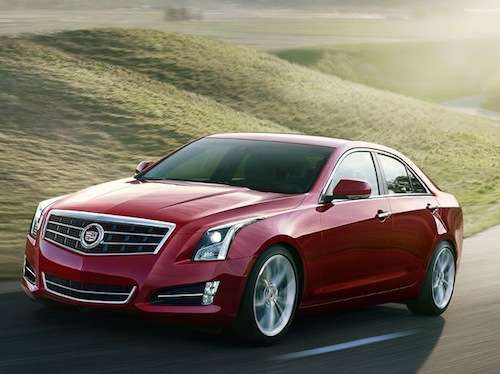 Although Cadillac is the second oldest car manufacturer and a brand that was once synonymous with luxury, its appeal has appeared to dwindle in recent years. While Cadillac’s sales have declined recently, rivals like Mercedes, BMW, Audi and Lexus have all been on the upswing. In effort to quell this downward trend, Cadillac is banking on new and innovative vehicles like the 2013 Cadillac ATS to reclaim its past glory.

With that in mind, Cadillac has just launched a new web series titled “Cadillac ATS vs. the World.” In addition to debuting online this week, 60- and 30-second television spots will air during the Opening Ceremony of the Olympic Games on July 27.

Much more than the run-of-the-mill car commercial, this cinematic journey showcases the 2013 ATS in the deserts of Morocco, to Monaco, to the Guoliang Tunnels in China. Each distinct location attempts to illustrate the vehicle’s versatility and innovative design.

“Completely new from the ground-up, ATS is Cadillac’s bold entry into the most significant segment of the global luxury auto industry,” says Don Butler, vice president of Cadillac Marketing. “ATS was developed to take on the world’s best sport sedans. So we designed a world challenge for ATS to dramatically demonstrate its all-new purpose-built chassis and advanced technology in a global, cinematic adventure.”

Butler went on to add:

“’ATS vs. the World’ is about the compelling performance of the car. ATS has been comprehensively prepared for a big and unprecedented mission. That inspired us to create this unique creative platform to present ATS to luxury consumers in a big, new and engaging way.”

In order to capture this unique vision, Cadillac sought the help of Academy Award-nominated director Joe Berlinger, and Jeff Zwart, a celebrated filmmaker and automotive expert. Berlinger was nominated for an Oscar earlier this year for his documentary Paradise Lost 3: Purgatory.

“It took global scale and a directorial dream team to help us pull off a production of this magnitude,” said Pat Fallon of Fallon Minneapolis, the agency behind the ad. “Jeff Zwart is one of the best car shooters in the world and Joe Berlinger is an Oscar-nominated documentarian with a great eye for human stories. A combination of talent like that is something that we just don’t see that often.”

The Cadillac ATS hits U.S. showrooms later this summer. The all-new ATS has a starting price tag of $33,990, including freight. The ATS touts a new 2.0-liter turbo engine and an estimated EPA highways fuel economy of 33 mpg.