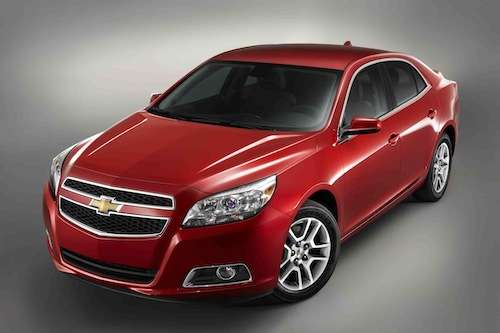 General Motor's recall affects 8,519 2013 Chevrolet Malibu vehicles in the United States, as well as another 1,000 in Mexico, Canada and overseas.
Advertisement

General Motors has announced the recall of 8,519 model-year 2013 Chevrolet Malibu vehicles in the United States due to a suspension problem. Chevrolet issued the recall because certain vehicles may contain one or more improperly tightened rear suspension bolts. According to the National Highway Traffic Safety Administration, faulty bolts could lead to loss of vehicle handling and increase the likelihood of a crash. The Chevrolet Malibu suspension bolt recall also affects 1,060 models sold in Canada, Mexico and overseas.

GM has already begun notifying customers of the recall. Authorized Chevrolet dealers will inspect the suspension bolts and retighten them, free of charge. Owners can contact GM at 800-630-2438 for more information. Concerned drivers can also call the NHTSA’s Vehicle Safety Hotline at 888-327-4236 or visit them online at www.safercar.gov.

In the meantime, 2013 Chevrolet Malibu owners can be on the look out for several symptoms related to the recall. According to a GM letter submitted to the NHTSA, owners may notice noise and minor handling issues initially. Drivers may experience more pronounced handling difficulties as the condition worsens and ultimately may not be able to control the vehicle at all.

The 2013 Chevrolet Malibu was previously recalled in May 2012 for an airbag issue. Chevrolet issued the recall, which concerned 4,304 Malibus, because hard braking may cause the sensing and diagnostic module (SDM) to reset on certain models. If this occurs, the side curtain airbags may deploy unintentionally, said the NHTSA.

Despite undergoing a complete overhaul, the 2013 Chevrolet Malibu ranks 17 out of 19, according to U.S. News’ list of Affordable Midsize Cars. The publication’s ranking is based on 16 published reviews and test drives. The 2013 Malibu may be an improvement compared to its predecessor, but it still ranks beneath the majority of its rivals. In particular, the Malibu lost points for its subpar base engine and poor fuel economy in the Eco model.

Speaking of the 2013 Chevrolet Malibu Eco, it received an honor that no automaker wants to win this past summer. In July, Fortune magazine dubbed the Malibu Eco the “most disliked car of the year.” The publication argued that the vehicle compared poorly to all of its competition and contained too many faults to overlook.

Not surprisingly, poor reviews and slow sales have sent GM reeling. In December, Automotive News reported that Chevrolet plans on retooling the Malibu by the end of 2013, just 18 months after the car first went on sale.

Lorne D Lee wrote on April 1, 2021 - 12:40pm Permalink
i was hoping to find out if the replacement parts for the 2013 chevy malibu are availiable now because my malibu is sounding like somethings wrong with my rear end and my mehanic said it is my toe link.