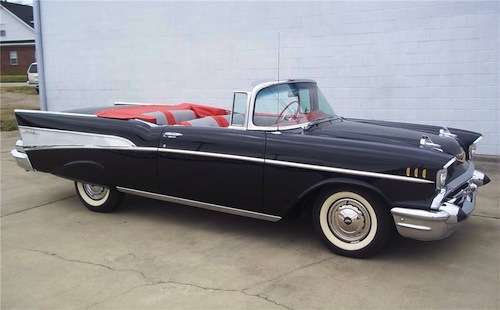 Although automotive enthusiasts could probably care less about Dr. Phil McGraw, most classic car fans can probably sympathize with the doc over the recent loss of his 1957 Chevy Bel Air convertible. TMZ reports that McGraw’s ride was stolen from a repair shop in Burbank, California last night.

The TV personality had the vehicle towed to the repair shop after he and his friend were unable to get the car to start. McGraw and his friend were reportedly working on the Chevy’s transmission prior to it being towed. Unfortunately for McGraw, his car was stolen just a few hours after arriving at the shop. Burbank law enforcement officials indicate that the thieves broke into the repair shop by smashing a roll-up door.

Quite the car collector, McGraw recently sold a 2010 Chevy Camaro, which was the 5th Camaro off the assembly line after Chevy reintroduced the model in 2009. Additionally, McGraw’s former ride was the first yellow Camaro to roll of the line. Aside from the 2010 Camaro, McGraw has also owned a 2002 Ferrari 360 Spider and 2001 Gemballa Porsche 911 Turbo. McGraw sold the pair of sports cars at Barrett-Jackson’s fourth annual Collector Car event on March 30, 2006.

Introduced in 1950, the Chevy Bel Air was a full-size car manufactured by General Motors until 1975 in America and 1981 in Canada. The Bel Air’s unique combination of power and style made it a popular vehicle amongst drag racers shortly after it was unveiled. Perhaps the most worthwhile was the 1962 Bel Air Sport Coupe, which was equipped with a 409 cubic inch “W-block” V8 engine capable of pounding out 409 bhp.

Image: Barrett-Jackson (Image shown is a 1957 Bel Air, but is not McGraw's actual vehicle)