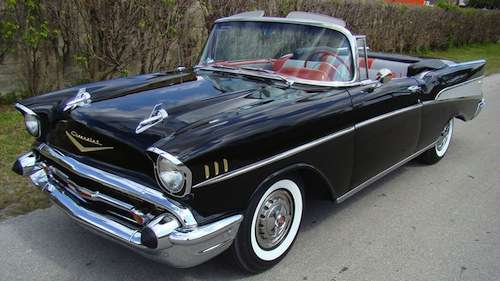 Dr. Phil's vintage ride '57 Chevy Bel Air was recovered on Tuesday, over three months after it was stolen from a Burbank repair shop.
Advertisement

Dr. Phil McGraw’s stolen 1957 Chevy Bel Air has been recovered, according to the Los Angeles County Sheriff’s Department. The vintage ride, which was stolen from a Burbank repair shop in August, was found at 7:25 a.m. Tuesday morning by investigators assigned to the Taskforce for Regional Autotheft Prevention, also known as TRAP.

Officials indicate that McGraw’s vehicle was in good condition, but contained minor body damage. In addition to McGraw’s ‘57 Chevy, police also recover 14 other classic vehicles as part of the investigation. Police have arrested several suspects in relation to the crime. McGraw’s classic ride is reportedly worth $100,000.

As we reported in late August, McGraw’s ’57 Chevy Bel Air was stolen from a repair shop named RODZ just hours after the vehicle was towed to the location. The TV talk show host decided to tow the car after he was unable to get the vehicle started. At the time, police indicated that the thieves broke into the repair shop by smashing the business’s roll-up door.

McGraw spoke of his car’s rescue telling TMZ: “I can’t say enough about the LA County Sheriff’s Department and of the LAPD TRAP West – particularly, Detective George Molina. Their tireless efforts and hard work resulted in the in-tact recovery of my car and the arrest of some prolific car thieves.”

The elated McGraw added: "Many thought that my ’57 Chevy was just a memory, but I had faith in LA’s finest. This is just one more in a really long line of reasons that I am and always have been a passionate and outspoken supporter of our men and women in law enforcement. We don’t thank them enough. I’ll hug a cop every chance I get this month.”

RODZ had previously offered a $1,000 reward for any leads leading to the arrest and conviction of the thieves. The reward was dependent on the safe return of the car. No word yet on whether TRAP utilized any leads from tipsters.

Aside from his prized 1957 Chevy Bel Air convertible, McGraw has owned countless memorable rides included a 2002 Ferrari 360 Spider and 2001 Gemballa Porsche 911 Turbo, both of which sold at Barrett-Jackson’s Collector Car event in 2006. The TV therapist also previously owned a rare 2010 Chevy Camaro, which was only the fifth to roll off the assembly line.

An immensely popular model, the 1957 Chevy Bel Air has appeared in countless Hollywood movies including The Bridges of Madison County, The Right Stuff, We Were Soldiers, Dreamgirls, Peggy Sue Got Married, Pee-wee’s Big Adventure, and Dr. No. The vehicle has also been featured in numerous hit television shows like , Alias, I Spy and Charlie’s Angels. An animated version of the Bel Air appeared in The Simpsons as well.