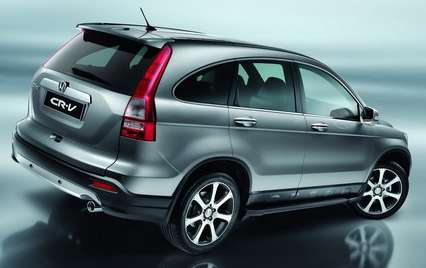 Honda nabbed an impressive 3 out 10 spots - the 2012 Honda CR-V, Civic and Odyssey - on the list, while no other automaker could manage more than one.
Advertisement

Three Honda vehicles have earned a spot in the newly unveiled “10 Best Family Car” list by Kelley Blue Book’s kbb.com. The 2012 Honda CR-V, 2012 Honda Odyssey and 2012 Honda Civic all made the list. KBB’s annual index rates vehicles on “family-approved criteria such as safety features, comfort, child-friendliness, consumer ratings and cost of ownership statistics. Honda is the only automaker to have more than one model on the list.

"We are honored to have three members of the Honda lineup recognized as benchmark family cars by Kelley Blue Book's kbb.com," said Michael Accavitti, vice president of marketing operations for American Honda. "To be recognized as providing the kind of safety, features and value required of the modern family machine speaks to the core attributes of every Honda vehicle."

Coming in at number 8 was the 2012 Honda Civic, which earned an overall KBB consumer rating of 4.5 out of 5. The all-new Civic was named a top family car because its smaller size and affordability compared to typical family cars, according to kbb.com. Additionally, the 2012 Civic features seating for 5 and an impressive fuel economy of 39-mpg highway. Adding to its “family appeal” is the Civic’s innovative 5-inch color dashboard display, which shows fuel economy, music info and family photos.

The next Honda model to make the list was the 2012 Honda CR-V, which came in at number 5. The latest CR-V boasts a perfect kbb.com 5.0 customer rating and an impressive 23/31-mpg. Now in its fourth-generation, the 2012 CR-V features the Real-Time all-wheel drive with Intelligent Control System. The CR-V also earned high marks for its rear-seat entertainment system, an important family-oriented option according to kbb.com.

Narrowly missing the top spot on kbb.com’s “10 Best Family Car” list was the 2012 Honda Odyssey. Finishing a strong second, the 2012 Odyssey earned a 4.3 consumer rating and possesses 18/27-mpg. According to kbb.com: “The Honda Odyssey is perfectly practical, happily shuttling kids or cargo while offering minivan must-haves like sliding rear doors and a flexible, roomy interior.” The family-friendly seating even features a second row seat that can expand to fit three car seats. The 2012 Honda Odyssey is the highest-ranking minivan on the list.

Aside from numerous accolades, Honda has posted encouraging sales figures as of late. American Honda sales were up 8.8 percent last month compared to January 2011, with sales exceeding 83,000 (including 8,301 in Acura sales). The CR-V had it best January ever selling 18,960 vehicles, while Civic sales were up 50 percent from the previous year.

Honda’s remarkable turnaround is due in part to the automaker's Japanese manufacturing plant fully recovering from the March 2011 tsunami in Japan. "Honda's return to full strength on the manufacturing front is already beginning to pay dividends on the sales floor," said John Mendel, American Honda's vice-president of sales. Look for strong Honda sales to continue when February sales figures debut in March.

The entire KBB “10 Best Family Car” list is as follows: