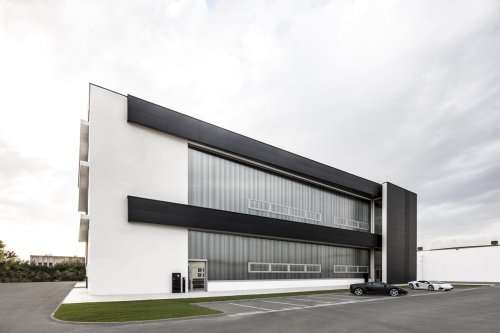 In a sign of things to come, Lambo has opened a new advanced prototyping center in Emiliana, Italy and it's the first multi-story building in that country with a Class A environmental rating.
Advertisement

The building is the company's new development center for designing and developing prototypes and pre-series vehicles. Its second floor is a miniature assembly line capable of putting out a handful of cars every day and the building as a whole has a Class A environmental rating, the highest energy-efficiency rating achievable in Italy.

Inside, the next wave of Lambo prototypes will be designed and engineered while the second floor assembly line allows the company to not only produce a few cars for testing, but also to trial assembly techniques that can be translated to their formal assembly facility if a prototype goes to production.

The building, located in Emiliana, Italy, uses less than 8 kilowatts per hour per cubic meter. This was achieved with features like polycarbonate walls, ceramic cladding for better insulation value, and a photovoltaic system (solar panels) that provides all of the building's electrical needs. That system means the building has near-zero CO2 impact and Lamborghini says this will be the new standard for all of their facilities from this point forward.

To inaugurate the building, Lambo is donating to five local school laboratories as well as cultural monuments in the area to help repair damage from the recent earthquakes in the Emilia region. Next year, when Lamborghini celebrates its 50th anniversary, they promise to contribute more money to help cultural centers that may still be affected by earthquake damage at that time.

"Inaugurating a sustainable, antiseismic industrial building here today at Lamborghini, in the heart of the area struck by the earthquake, sends an important signal," commented Corrado Clini, Minister of Environment, Land and Sea. "It expresses the strong, determined desire to move forward that is evident in the Emilia area."

The building's first order of business will be producing 20 limited editions of the Sesto Elemento that was introduced at the Paris Motor Show.