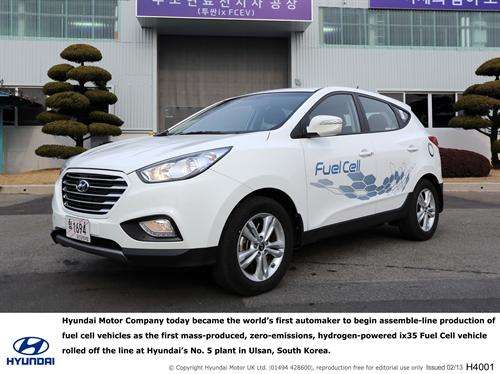 “With the ix35 Fuel Cell vehicle, Hyundai is leading the way into the zero-emissions future,” Hyundai Motor Vice Chairman, Eok Jo Kim said at the ceremony. “The ix35 Fuel Cell is the most eco-friendly vehicle in the auto industry and proves that hydrogen fuel cell technology in daily driving is no longer a dream.”

Based on the popular ix35 C-segment sport utility sold in Europe and Asia (similar to the Tucson here in America), the FCV that rolled off the line this week is the first of a planned 1,000 units to be produced by 2015 with speed of production depending on purchase levels. The first seventeen of those are destined for Copenhagen, Denmark and Skane, Sweden where they will become fleet vehicles as part of the Nordic carbon-free plan. Most of the ix35 Fuel Cell SUVs will end up in Europe where the new "hydrogen highway" has been in development for several years.

Hyundai plans to use these initial sales to begin lowering production costs and raising economies of scale for FCVs, giving them a leg up on most other automakers who will not be rolling out fuel cell vehicles until 2015 or beyond. Hyundai hopes to aggressively carve their name into the market in much the same way Toyota did with the Prius.

The Hyundai ix35 Fuel Cell performs with similar characteristics to its gasoline counterpart, with a 0-60 mph time of about 12 seconds and a range of about 594 kilometers per tank fill. It has a lower center of gravity, due to the fuel cell stacks, storage tanks, and small battery being centrally-placed in the SUV, and has zero emissions at the tailpipe. Hyundai has been developing the ix35 for fourteen years and has put more than 2 million road test miles on the prototypes throughout Europe, Korea, and the U.S.

The ix35's fuel cell stacks output 100 kW into a small 24 kW lithium-ion battery pack. Hydrogen for the cells is stored in tanks at 700 bar, weighing only 7.6 kilograms. Refuel time is about the same as filling a gasoline tank at the pump.

“Assembly-line production of fuel cell vehicles marks a crucial milestone in the history of the automobile industry not just in Korea, but throughout the world,” Mang Woo Park, mayor of Ulsan city, said in his congratulatory message. “By supplying more hydrogen refueling stations to support the eco-friendly fuel cell vehicles produced, we will make Ulsan the landmark for eco-friendly automobiles.”