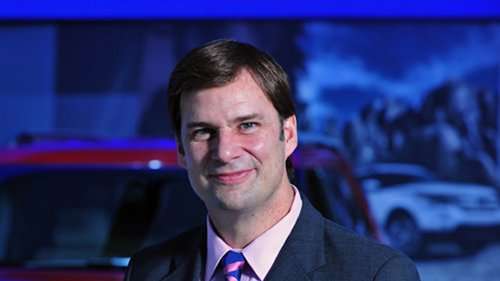 Ford Executive Vice President Jim Farley gave the keynote address at the 2013 New York International Auto Show, highlighting the extreme changes the automotive industry in North America has undergone after the "great recession" of 2008; including demographic shifts in buyers, a new focus on fuel economy, and the power of mobile platforms.
Advertisement

Jim Farley is the Executive Vice President of Global Marketing, Sales and Service and Lincoln at Ford Motor Company. His keynote address at the 2013 NYIAS focused on three things that have emerged as key factors in the recovery from what he calls "the great recession" after the near-collapse of the U.S. auto industry in 2008.

This post-recession auto industry, Farley says, is being reshaped and driven by demographic shifts in consumer markets, a new focus on fuel economy by both consumers and automakers, and the fast-paced growth of mobile platforms and technologies.

Changing Consumer Expectations
Consumers globally, says Farley, are no longer satisfied with the idea of luxury options not being standard. "They are looking for luxury-level quality, performance and features in smaller sizes and at more reasonable price levels." Sixty percent of respondents to a recent Luxury Institute survey expect to buy a fully-equipped luxury vehicle for under $60,000 - far lower than the former $100,000 price tag standard just a few years ago. Driving this jump into luxury expectations are small utilities, whose growth is outpacing all other luxury segments with a near 60 percent jump in 2012 and more than 200 percent growth in the past four years.

Unsaid in these statements by Farley is what this new set of consumer expectations means for automakers. Luxury brands are not commanding the same type of price premium and high margins they did just a few years ago. As these premiums struggle for relevance and profits, makes once never considered to be "luxurious" are now making forays into the realm and seizing market share. Ford has obviously seen the writing on the wall, with vehicles like its flagship Fusion sedan taking on a much more luxury-type appeal. Other automakers are following suit.

These consumer expectations include fuel economy. Farley says this is probably the greatest cross-demographic shift in the industry, as consumers of every segment are focusing more and more on fuel economy. Often the top consideration for a new vehicle purchase, consumers are seeing a reaction from the industry in the form of floods of marketing claims and data releases hoping to bolster the fuel economy credibility of a given make or model.

“We now have a torrent of ‘best-in-class’ claims hitting consumers from all sides, and it’s starting to become noise,” Farley said.

New Demographics
Admitting that baby boomers will continue to be the market's greatest influence for years to come, Farley pointed out that despite that, things are radically changing in the automotive market in the U.S. Women, Hispanics and the emergence of millenials as consumers has altered how the automotive industry designs and sells vehicles.

Globally, Farley says, it's women who are affecting the most change on the industry: “More than 1 billion women will enter the middle class globally by 2020, and many will be buying vehicles for the first time." In the United States, women are outpacing men in automotive purchases for the first time in history.

At the same time, Hispanic households are becoming increasingly affluent with those making more than $100,000 a year in the U.S. jumping by 126 percent. These buyers are more likely to prefer luxury vehicles. “As Hispanics buy luxury vehicles at a faster rate than the overall market, our brands must become more compelling, interesting and relevant than ever,” Farley said.

Meanwhile, he pointed out, the millenials are entering the market and will begin to be the "young family buyer" in the next few years. Brands must continue working hard to seize them as loyal brand-aware consumers now or risk losing them as they upscale.

Mobile Platforms Become Powerful
Anyone observing the automotive industry even peripherally has noticed that more and more emphasis is being made on the in-car technologies not related to driving. Consumers are expecting more connectivity from their vehicles and infotainment is the new focus for models of every price point. No longer the purview of luxury brands, mobile connectivity is fast becoming one of the biggest deciding factors in a model's success rate.

This extends to the consumer purchase experience, which is also radically changing. “Most of us recognize that mobile is a power enabler for customers," said Farley, "putting them in control of the shopping process and changing their expectations around connectivity.” It's becoming more obvious that the car is being seen by many consumers as an extension of their laptop, mobile device, and other personal connectivity accessories. We no longer sit in our cars listening to music and waiting for traffic so we can get home to check emails and watch television. Today's consumer expects to conduct business, talk with friends, and stay connected while on the road.

Tellingly, representatives from both Google and Facebook were a part of the keynote address at this year's NYIAS, emphasizing the heavy role technology plays and will continue to play in automotive.

The More Things Change..
..the more they stay the same. Although automotive has been radically changing, this has been the case since the beginning. From the time the first Olds Curved Dash began mass production to the rise, death, and re-emergence of the electric car, things have been fairly fast-paced in the automobile industry. Nothing in this industry is static. Of all the things Jim Farley spoke about at this year's New York show, that one fact was the core of his keynote. The automobile has become so integral to our modern lives that to remove it, we would have to radically change every aspect of our lifestyles and totally reshape our social and economic paradigms.

Cars have given us the ability to get from one place to another faster than ever before. They've increased our reach, our ability to communicate, and contributed to our modern lifestyle more than any other technology save perhaps electricity. With a car, we can go farther, take more with us, and do it faster than we could before. Their continued evolution has only enhanced those properties. For most people in the world, access to a vehicle is often the most enabling factor in their lives, creating a gateway to better opportunities.. This is as true in Detroit or Rio as it is in Zimbabwe or Kabul.

Ron Kurtz wrote on April 2, 2013 - 4:37pm Permalink
Contrary to Mr. Farley's observations, it appears there has been no significant change in what the affluent believe should be the price of a luxury car as a result of the economic challenges of the past few years. In an attempt to define "luxury" for a car in an objective and quantifiable way, the American Affluence Research Center asked the weathiest 10% of U.S. households to state the most they could imagine spending for a new car. In the September 2009 survey, the median (not average) price cited by all of the survey respondents was $40,000. The highest income group (average income of $439,000) in the survey sample cited a median value of $50,000 for a new car. The highest net worth group (average net worth of $10.8 million) cited a median value of $60,000 for a new car.
Aaron Turpen wrote on April 3, 2013 - 1:44pm Permalink
Uhh... you just proved his point. He cited a survey from the early 2000s in which those with an income over $400,000 said that $100,000 was what they'd consider for top spending for a luxury vehicle.
Ron Kurtz wrote on April 3, 2013 - 5:07pm Permalink
No need to debate this, but I had a typo in my comments as the AARC survey was done in September 2008, which I consider to be a "few" years ago and just after the economic problems began to appear. I guess ithe accuracy of my comment depends partially on how he defines "few" years for the $100K observation and the source of that number. The article did not say the number was from a survey in the early 2000s or provide details on the survey methodology or calculation of the number. Also, by using a median value, I was showing that half of the highest net worth respondents (with an average income of over $600,000) were willing to spend over $60,000 in the AARC survey. This, and the other price points cited in my original comments, suggests very little change when compared to the results of the more recent Luxury Institute survey. Perhaps the $100,000 number was inaccurate or misleading. That, and the indications there have been no major changes in price expectations as a result of the great recession, are my main points.