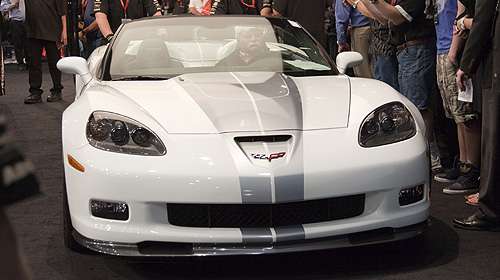 In one fell swoop charity and one buyer's extensive collection got a big boost at the Barrett-Jackson Scottsdale collector car auction with the sale of a 2013 Chevrolet Corvette 427 for six times its expected sale price.
Advertisement

Of course, this was truly a one-of-a-kind 2013 Chevrolet Corvette 427 Convertible that was on the auction block. Its vehicle identification number, or VIN, is #0001 (plus all of the usual identifying numbers). That could explain the winning bid of $600,000.

According to Autoblog, the buyer was Ron Pratte, who has bought many previous charity auction cars at Barrett-Jackson over the last several years. Pratte made his money by fortuitously selling his wood framing and concrete foundation company right before the housing bust. Pratte has an extensive car collection.

Pratte is not only buying at Barrett-Jackson. He is selling some of his extensive collection including a 1948 Tucker Torpedo (one of only 51 made by Preston Tucker); 1947 Bentley Mark VI Coachworks By Franay that is universally recognized as the most successful and expensive post war Bentley/Rolls-Royce automobile of all time; and a 1957 De Soto Adventurer Convertible powered by the famous 345/345hp HEMI V8 with dual quads, automatic transmission, push-button shifter and independent torsion bar front suspension. The Adventurer was to DeSoto what the "300" letter series was to Chrysler, according to the Barrett-Jackson website.

Chevrolet and Hendrick Motorsports teamed up for the auction, with four-time NASCAR Sprint Cup Champion Jeff Gordon and team owner Rick Hendrick, to raise a total of $700,000 for the AARP’s Drive to End Hunger food relief program. The Drive to End Hunger is part of a multi-year sponsorship for Gordon’s No. 24 Chevrolet. It calls on racing fans, corporations and charitable organizations to raise money, build awareness, and engage Americans who face the threat of hunger.

It's a serious cause, to be sure, but it's long been one of the great laments that all the hot Corvettes seem to be driven by rich guys over 50. The strong AARP connection makes sense now.

The Corvette 427 Convertible, which arrives at U.S. Chevrolet dealers this summer, blends elements of the Z06 and ZR1 models. Its heart is the 427-cubic-inch (7.0-liter) LS7 engine from the Corvette Z06. Rated at 505 horsepower and 470 lb.-ft. of torque, it is the most powerful engine ever installed in a production Corvette convertible – and, like the Z06, the 427 Convertible is only available with a six-speed manual transmission.

Early 427-powered Corvettes, particularly convertibles, offered from 1966 to 1969 are some of the most-coveted and collectable Corvettes ever produced.

Today, Jan. 22, is the last day of the three-day Barrett-Jackson Scottsdale auction. You can catch live coverage on SpeedTV from 12 to 4 p.m., Mountain Standard Time (during commercial breaks of the NFC and AFC championship games).