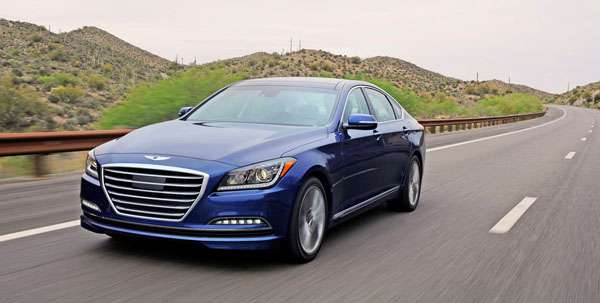 Hyundai Genesis Gets Award as Big as Texas

The accolades for the 2015 Hyundai Genesis continue to accumulate just weeks after its official introduction. This time it has taken home an award as big as the state of Texas.
Advertisement

The all-new 2015 Hyundai Genesis has been named the 2014 “Car of Texas” by the Texas Auto Writers Association (TAWA), one of the largest and most respected media associations in the U.S., according to a Hyundai news release. Issued at the annual Texas Auto Roundup at the iconic Texas Motor Speedway, the award is the event’s highest ranking accolade and a first for a Hyundai vehicle. In addition, the Genesis earned top awards for Mid-size Luxury Car and Best New Interior.

As with years past, the 2014 Texas Auto Roundup had active TAWA media members evaluate almost 50 of the industry’s leading sedans, coupes, family vehicles and performance cars. Each entry was put through its paces on the outer roads and inner circuit of Dallas/Fort Worth’s Texas Motor Speedway. For 2014, 13 segment awards were named as well as supplemental awards for Best New Feature, Best New Interior and Best Value. Two title awards were given out as well – Family Car of Texas and Car of Texas.

“TAWA members were easily impressed by the 2015 Hyundai Genesis, enough to name it the top honor Car of Texas,” said Michael Marrs, TAWA president, in a news release. “Luxury is important to Texans but so is value. The Genesis hits all the right buttons as it is more luxurious and dynamic than before all while still holding on to the namesake’s incredible value.”

Competing in the mid-size luxury segment, the Hyundai Genesis not only bested its category competition in the form of the 2015 Volvo S60 T6 and 2014 Lincoln MKZ, but it also took Car of Texas by 10 points. No other vehicle in the 13 segments received as many votes as Genesis did.

Ford's Mustang Shelby GT500 won the award in 2013. TAWA also presents annually its much more prestigious Truck of Texas award, which in 2013 went to the 2014 Ram 1500 EcoDiesel.