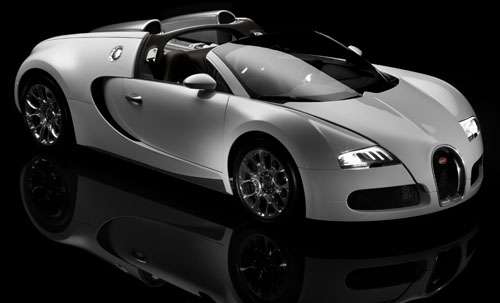 Attendees to the New York International Auto Show, which is open to the public from April 6 to 16 at the Jacob Javitts Center in Manhattan, will be able to see for the first time Bugatti Veyron 16.4 Grand Sport. That is unless they have $1.9 million and have already purchased one.
Advertisement

Interestingly enough, the Bugatti Veyron 16.4 Grand Sport is being brought to the show by the local dealership: Bugatti Greenwich, a division of Miller Motorcars of Greenwich (CT). Apparently, Bugatti itself yawned at the thought of bringing the car to New York, the largest auto show in the country based on attendance. According to a press release from the dealership, "High customer demand fuelled the decision to present the Grand Sport at NYIAS this year."

The unique special edition Grand Sport on display, the Blanc Noir, boasts a matte white finish with gloss black accents on the spoiler, intakes, wheels and gas cap. This model demonstrates an ever growing variety of options available to existing and new Grand Sport owners. After all, more options usually means more profits for a company.

Bugatti Automobiles S.A.S has limited production of the Grand Sport to no more than 150 units, of which 95 examples are still available (times must be tough in the uber-luxury world). The Bugatti Veyron Grand Sport is priced from 1.4 million Euros (approximately $1.9 million).

The Grand Sport is assembled by hand at the company’s headquarters in Molsheim, France. In cooperation with the Bugatti design and engineering team, Bugatti customers can tailor their vehicles to their personal preferences by choosing from a broad array of exquisite materials and colors.

When the roof is closed, the Grand Sport can reach 253 mph, while speeds of up to 223 mph are possible with the roof off. Should it rain, an innovative soft-top roof, like an umbrella, stored in the luggage compartment, can be opened up at any time. With this soft top in place, the car can travel at up to 100 mph.

Bugatti Greenwich, a division of Miller Motorcars that is based in Connecticut will also present the McLaren MP4-12C and the new Virage Volante and Rapide from Aston Martin, alongside the Blanc Noir at NYIAS.

Tsingshan's Threat to Tesla: EV Maker Is In Battery Crosshairs
Tesla-Funded Research Reveals One of The Biggest Mysteries of EV Battery
END_OF_DOCUMENT_TOKEN_TO_BE_REPLACED