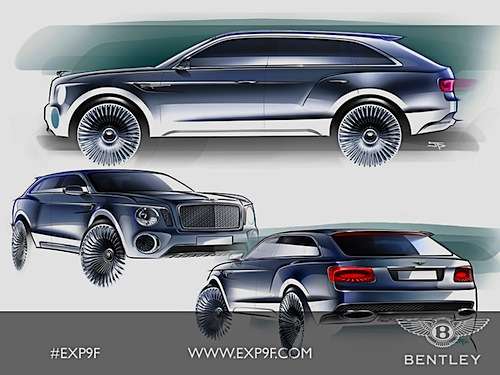 A Bentley XP9F Plug-In Hybrid For The Competition

When we think of traditional high-class British cars, such as Rolls Royce and Bentley, the term alternative energy doesn’t necessarily register on our radar. It seems Bentley is intent on producing no less than a plug-in hybrid.
Advertisement

Bentley, The Race Cars. Most people don’t know that Bentley was once upon a time a racecar company. The Bentley brothers were avid racers and started their company on the 18, January 1919 while hitting the 24hrs of Le Mans as far back as 1924. They were eventually purchased by Rolls Royce in 1931. Since then, Bentley more or less lived under the shadow of Rolls Royce. But this was until a few years ago when the sportier Mulsanne car came out, rekindling with Bentley’s original sports identity and giving plush performance on the Riviera and abroad.

A Plug-In Hybrid Bentley. What might appear as heresy to some, i.e. a plug-in hybrid Bentley might not be such a stretch after all. The Bentley brothers were keen racers and any technology aimed at raising efficiency, especially when we consider their decade long love of racing at Le Mans, all the sudden a plug-in hybrid platform makes more sense. But to whom?

Technically Speaking. Before we answer this, Bentley skipped right over the traditional route of building first a hybrid, then a plug-in hybrid with its XP9F concept SUV that should keep many of the prototype features. And this PHEV is no slouch either. With the concept said to achieve the 0 to 62 mph below five seconds, it makes this classy-boxed wheel wagon probably the fastest around discriminating blocks. The pure electric range is claimed to be good for 18.6 miles, but its CO2 emissions is where the car truly departs from traditional such like cars with 130g/km.

In terms of raw performance, the plug-in hybrid should have plenty as we can assume a Bentley should have. An estimated 591 hp with 590 lb-ft of torque should be squeezed from the platform. In its V8 turbo, the horsepower should around 500, enough for most, if not all trips around town and beyond.

This XP9F wants to rekindle Bentley’s prestigious past and likens itself closer to the company’s line of discriminating vehicles. In fact, the plug-in hybrid aims for no less than to be the spiritual descendant of the famous 9 F, including the Mulsanne and Continental GT, GTC and Flying Spur.

As to whom, or its direct competition, Bentley clearly aims here for the Audi Q7 and Porsche Cayenne, showing that the British flair is not only still alive but can give the competition a lesson or two. All in all, if you want something a little more unique than California sprawling Audi Q7 or a Porsche Cayenne, the XP9F Plug-In Hybrid should be your ticket to exclusivity, even at a reasonable suggested price of $140,000.

Tesla Contemplates A New Strategy for China Retail even As Sales Boom
Jay Leno on Elon Musk & EVs: “I Think He Should Get ... Credit"
END_OF_DOCUMENT_TOKEN_TO_BE_REPLACED