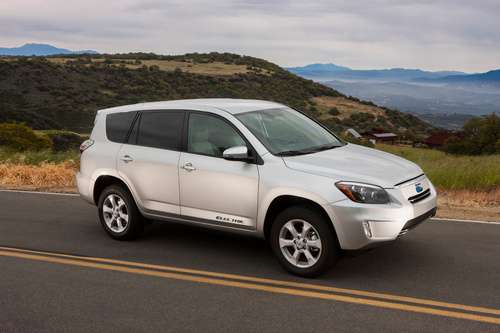 The new RAV4 EV, an all electric SUV designed jointly by Toyota and Tesla Motors, is due to be launched later this summer, and toady Toyota brought in news media for a first drive opportunity.
Advertisement

The second generation Toyota RAV4 EV, designed in collaboration with Tesla Motors, was shown to news media today for "first drive" opportunities. The all electric SUV will start deliveries through California Toyota dealerships later this summer. While precise specifications have not been released, Toyota "lifted the hood" and "shared developmental and technical details" of the new RAV4 EV.

The new RAV4 EV is a result of a collaboration between Toyota and Tesla. In May 2010 the two companies announced collaboration to develop electric vehicles, parts, production systems and engineering support, and then in June 2010 they announced the new RAV4 EV. Along the way Toyota bought a stake in Tesla Motors, and sold to Tesla a disused factory in Fremont CA which Tesla is now using to manufacture the Tesla Model S. The new RAV4 EV is not assembled in Tesla's factory, but is instead assembled in Toyota's factory in Canada where the gas powered RAV4 is assembled.

The new RAV4 EV was revealed to the public in May 2012, at the EVS26 trade show. To manage the "compressed" (two year) time frame, Toyota developed the eFAST process (early field and suitability testing), a new design protocol put in place for the RAV4 EV to validate and confirm vehicle performance.

The new RAV4 EV combines the modern RAV4 platform, with a battery pack and drive train designed by Tesla Motors. The popular RAV4 compact SUV platform, combined with an electric drive train, results in what the company expects will be the longest EPA estimated driving range rating of any non-luxury EV. It has a smooth quiet ride, a low coefficient of drag (at 0.30 Cd), and low center of gravity. To improve over the gas-powered RAV4 coefficient of drag (0.35 Cd) Toyota's engineers re-styled the front bumper, upper and lower grill, side mirrors, rear spoiler, and under body design to optimize air flow around the vehicle. The battery pack is located beneath the passenger compartment, to shift the center of gravity lower.

“The RAV4 EV’s driving performance, dynamics and cargo capacity are equal to or exceed the gas powered RAV4 V6,” said Bill Fay, Toyota division group vice president and general manager. “Arriving fully-equipped with an MSRP of $49,800, with available combined federal and state incentives of up to $10,000, the RAV4 EV is a practical, versatile option for the EV enthusiast.”

The climate control system in the passenger cabin has three modes, two of which save a significant amount of power allowing the RAV4 EV to have a longer range. The NORMAL mode operates similarly to the climate control system in regular gas powered cars, and while it provides familiar levels of comfort it consumes the most power of the three modes. The ECO LO mode is meant to be a good balance between cabin comfort and improved range. The ECO HI mode offers up to 40 percent power reduction compared to NORMAL. The RAV4 EV cabin includes seat heaters allowing for passenger comfort with low power consumption.

The safety systems include one subsystem that automatically safeguard against the unintentional discharge of energy. In the event of an accident, electrical contacts automatically open, to isolate the battery from the rest of the high-voltage system. After those contacts open "active and passive discharge strategies" engage to "remove any remaining energy from the high-voltage system within five seconds" for compliance with Federal Motor Vehicle Safety Standards.

Because the new RAV4 EV uses a 40A charging system, the company worked with Leviton to develop a custom version of that company's charging station specifically for the RAV4 EV.

Over 10 years ago Toyota built the first generation RAV4 EV for leasing during the "Mandate Era" of California's efforts to increase the number of Zero Emissions Vehicles (ZEV) on the road. That earlier RAV4 EV was built in small quantities, but has proved to be very reliable with many still on the road despite Toyota's best efforts (at one time) to retrieve and crush all the Gen1 RAV4 EV's. The second generation RAV4 EV is being built in a different time, under different conditions, and will surely come to a different fate.

“Developing the RAV4 EV with Tesla gave us the opportunity to work with a leading-edge Silicon Valley company,” said Greg Bernas, chief engineer for Toyota Engineering and Manufacturing. “Tesla brought their EV powertrain expertise and entrepreneurial spirit. We brought our customer – first focus and decades of production experience to the project. It wasn’t always an easy process but I think we succeeded in blending our strengths and learning from one another.”

Rob wrote on August 2, 2012 - 11:42pm Permalink
Why oh why would they pigeonhole their vehicle into a single range? An SUV is the perfect platform to be capable of supporting larger battery packs, why not offer a range of battery options, 100, 200 and 300 miles to let people buy a car with a range that suits their driving habits, it would open up the vehicle to such a larger potential market.