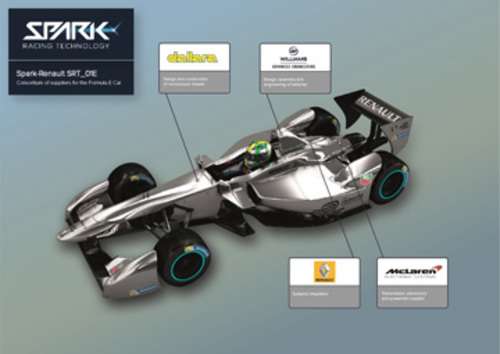 The electric race car series due to launch in 2014 reached two significant milestones, showing they're ready to build the race cars, and have a complete calendar for the 2014 season.
Advertisement

The Formula E electric race car series is getting ever-more-real after reaching a pair of milestones this week. They're racing to meet a September deadline to have the 2014 season fully organized and ready for approval by the FIA.

The first announcement came from Spark Racing Technology (SPARK), the Formula E subsidiary that's focusing on building the cars that will be used in the 2014 season. SPARK announced they'd been approved by the FIA for homologation as the supplier of all the electrical single-seaters to the first season of Formula E Championship, and that they'd formed a consortium of the companies assisting with the design and construction of those cars.

What this means is that SPARK is fully approved to build the cars, and have lined up the corporate partners to pull it off. Those partners are:- Renault: Powertrain architecture, systems integration, powertrain electrical safety & performance optimization; Williams Advanced Engineering: Design, manufacture and assembly of batteries and their battery management systems; McLaren Electronic Systems: Development, manufacture and supply of electric motor, gearbox and power & control electronics; Dallara: Design and construction of the monocoque; SPARK: Car design and conception (chassis, aerodynamics, assembly, suspension)

SPARK had already announced arrangements with each of these companies, what's new is that they're formally working together as a consortium.

The second announcement was the selection of Berlin as the 10th city to host the Formula E in the 2014 season. That completes the 2014 calendar, with the full list of host cities being: London, Rome, Los Angeles, Miami, Beijing, Rio de Janeiro, Buenos Aires, Putrajaya, Bangkok, and Berlin.

The Formula E is a world cup series, meaning it will host racing events around the world. The organization has been entertaining proposals from cities around the world to host the races. The races will be held in city centers, rather than at race tracks.

The Formula E race car is an all electric car similar in style to Formula 1 race cars. Ten teams are participating, with two drivers per team, with two cars per driver. Each race will last for about an hour, and will feature the drivers swapping cars halfway through the race. That's because current battery technology won't support them racing for a full hour, however the cars are expected to reach speeds of 220 kilometers/hr (140 miles/hr).

Berlin was chosen in part because they're already a leader in electric vehicle adoption. Senator Cornelia Yzer commented: “Berlin, as an international city and leading metropolis of electric mobility, is an ideal venue for Formula E. We are pleased to be able to host the event in this cosmopolitan city and for Berlin to present new and innovative technologies. Formula E will also inspire people to consider Electromobility.”

Gerhard W. Steindorf, CEO of Tempelhof, added: "We are very pleased that Formula E will be held at Tempelhof Airport. Since 2009, the historical building has been the scene of numerous, very different events. The airport building is always a spectacular setting for the presentation of innovative ideas and technologies. Formula E is something completely new and pioneering and fits it perfectly into our idea of how this unique place is used.”