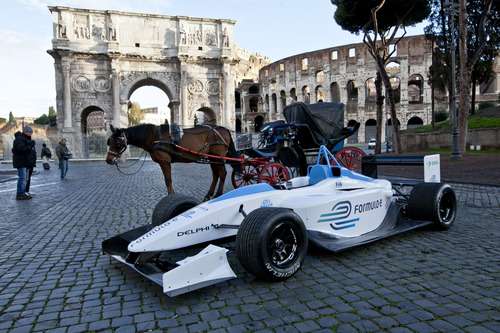 The start-up electric race car championship, Formula E, has selected Rome as a host city for its first season, in 2014.
Advertisement

Formula E's quest to be the first electric race car series took another step toward the 2014 launch of the series. On Saturday, Formula E and the Mayor of Rome signed an agreement under which Rome would be the first European city to host the FIA Formula E Championship in 2014.

Formula E is an FIA sanctioned Championship racing series featuring Formula cars powered on electricity. Demonstrations of Formula E electric race cars are due in 2013, with the race series itself launching in 2014. The series is expected to have 10 teams, 20 drivers, with the races themselves staged in urban centers around the world. In November the series announced an agreement with McLaren to provide 42 electric race cars for the use of those teams.

Formula E Holdings say that a large number of cities are interested in hosting the Formula E series races. The list of venues will soon be proposed to the FIA for the first season (2014) and there will be further announcements of other cities in the coming weeks.

The agreement with McLaren is to design and build the powertrain for the first Formula E cars in collaboration with Spark Racing Technology (SRT), a new company led by Frederic Vasseur. Vasseur formerly led a company, Formulec, which designed and built an earlier generation of electric race cars. The Formula E championship is 'open' in that other race car designers and constructors can build cars for the championship, so long as they conform to the rules. Those rules, the FIA technical regulations for electric race cars, will be published soon for the Championship. The agreement with McLaren is to ensure availability of electric race cars for the 2014 Championship season.

Jean Todt, FIA President, said: "It gives me great pleasure to be in Rome for this exciting announcement that the eternal city has expressed its firm interest to host a race in the Formula E 2014 championship calendar. The contrast between this innovative motorsport series and the rich ancient history of Rome is one I am sure the public and the media will be intrigued and enriched by."

Alejandro Agag, CEO of Formula E Holdings said: “We are honored to have Rome on board as the first European city to host Formula E, since Italy is renowned for its motorsports passion, expertise and technical innovation. Clean urban mobility and sustainability are a priority for our Championship, and Formula E wants to become a showcase for these advances through an entertaining and all-inclusive spectacle. We are thankful to the Rome City Mayor and authorities for their enthusiastic welcome and support.”