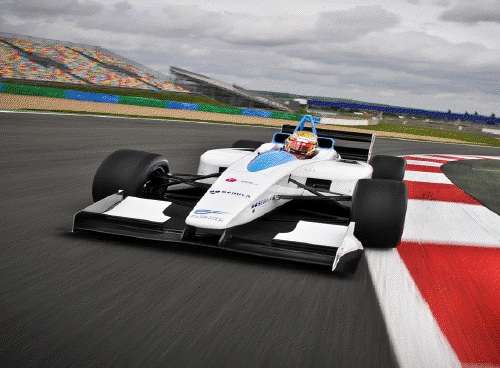 The Formula E electric race car series, due to launch in 2014, has announced a deal with sports car maker McLaren is to provide all electric Formula style electric race cars for teams to race.
Advertisement

While the electric motorcycle racing field is making great technological leaps due to its racing series (TTXGP, e-Power, TT ZERO), electric car racing has been limited to a few prototype vehicles and electric drag racing hobbyists. The Formula E looks to change this by launching an all electric race car series in 2014. Formula E's plans took a concrete step on Thursday with an order for 42 electric Formula cars to be built by McLaren and a newly formed company, Spark Racing Technology (SRT).

The Formula E is an FIA sanctioned Championship series featuring Formula cars powered on electricity. The Formula E series is organized and promoted by Formula E Holdings. Demonstrations of Formula E electric race cars are due in 2013, with the race series itself launching in 2014. The series is expected to have 10 teams, 20 drivers, with the races themselves staged in urban centers around the world.

The 42 electric Formula race cars will be divvied up with four cars per team, one car as the official test vehicle, and one car for crash testing.

Frédéric Vasseur, CEO of Spark Racing Technology, said “I am proud and happy to give birth to this project that is innovative and extremely rewarding for a company both technically and philosophically. Personally, I can write a new chapter, regardless of my other ventures in motorsport. Confidence and commitment from our partner McLaren is a guarantee of quality and reliability without which this project would not have been possible. The association with a globally recognized car manufacturer is definitely the right way to go. Sport and society are evolving and Spark Racing Technology is proud to be the pioneer and leader in the new field of electric cars that will revolutionize the motor racing industry and attitude.”

Until now, the team led by Frédéric Vasseur had been working on the French designed Formulec car, the first electric Formula car to be built. Formula E Holdings acquired the Formulec technology last August and integrated the team into the FEH structure. SRT is a step further for Vasseur's team.

The Formula E has designated itself an 'open' championship series, meaning that individual teams are free to bring their own technology and race car design to the race. The FIA is due to publish technical regulations soon for the Championship to set up the open framework.

This means that while Formula E wants to be an open series, it is intending to make it easier for teams to enter the championship series by making electric race cars available. Otherwise the teams would be required to build their own electric race cars, a process which would almost certainly take much longer, cost much more, and result in a wide range of power and speed.

FEH says that if a team decides to build their own electric race car, the remaining Spark Cars will be used for roadshows and other racing activities.

Martin Whitmarsh (Team principal, Vodafone McLaren Mercedes): “I’m a passionate believer in the role that motorsport can play in showcasing and spearheading the development of future technologies, and regard the Formula E concept as an exciting innovation for global motorsport. McLaren has worked with Frédéric Vasseur for many years, and our association has been very successful. Working together in Formula E, McLaren’s world-class technology and Spark Racing Technology’s expert knowledge will combine to allow both companies to stay at the forefront of technical innovation and hopefully open up great opportunities for the racing cars of tomorrow.”