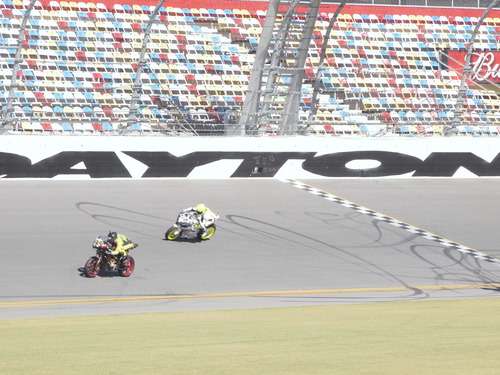 Daytona International Speedway this weekend was host to the thundering sound of quiet electric motorcycle racing action with the 2012 TTXGP World Championship race. In an exciting race on Sunday morning, Steve Atlas took home the World Championship title for Brammo, winning it from two-time Champion Matthias Himmelmann of Muench Racing who came in 2nd.

However the weekend was characterized by troubles for both Brammo and Catavolt. Both Steve Atlas's and Eric Bostrom's Empulse RR's were repeatedly losing power during practice and qualifying sessions, even while hitting these amazing speeds. The team's engineers traced and developed a fix on-site, however Bostrom's bike developed a serious problem during the first lap of the race and he had to take the first lap very slow which put him well behind the lead. For Catavolt, the team from Australia, their bike had performed great most of the weekend until Saturday's practice round when a short circuit in the motor forced rider Jason Morris out of the race. It looked dire for the team on Saturday evening as they prepared for major surgery on the motor, and by Sunday morning the bike was working again albeit at a greatly reduced power.

The race started off with Steve Atlas taking a strong lead over team-mate Eric Bostrom. In the back of the first lap Bostrom's bike developed a problem which made his first lap go extremely slowly for a 2:24.116 mins lap, where he had been hitting 1:59 laps during practice. In the meantime Steve Atlas hit lap times between 1:59.944-2:01.212 mins for all five laps.

Himmelmann was a shade slower than both of Brammo's bikes, and he came knowing his bike was slower than Brammo's but was defending his title as the reigning TTXGP World Champion and the 2012 TTXGP European Champion. He had lap times from 2:18.811 in the first lap, to 2:06.147 in the last. This was good enough to win 2nd place beating Bostrom by nearly 10 seconds.

Bostrom of course had problems in his first lap, but his pace improved every lap to where his last lap was 2:00.136. That put him in the 2:00 ballpark both Brammo boys were hitting during practice.

Jeremiah Johnson (BE-EV.COM) was racing a modified Zero S, a bike that is quite a bit slower than the others. Stock the Zero S is rated for an 88 miles/hr top speed, but with the modifications (stiffer suspension, and replacing the controller for a beefier model) he was hitting speeds of 99 miles/hr. This speed is on the cusp of Brandon Miller's land speed record of 101 miles/hr in the lightweight electric motorcycle class, which was also set with a modified Zero S.

Jason Morris (Catavolt) was the 2012 EFX-TTXGP Australia Champion riding a home-built conversion electric motorcycle. His bike had performed fabulously most of the weekend, and when put in a practice session with some gas bikes he beat them. Unfortunately during qualifying on Saturday the motor on his bike developed a bad problem, and in order to get on the track for today's race required major surgery that greatly limited the power of the bike. As a result, while he completed the race, it was a very slow two laps when Saturday night it looked impossible.

Perhaps the most significant result of this weekends race was Bostrom hitting 170.1 miles/hr during practice. Team Brammo has been on a path of rapid development since mid-summer when they upgraded the motors just before the Laguna Seca race. Since that race the team has worked intensely with Eric Bostrom and Steve Atlas in testing and improving the overall design of the Empulse RR's, which resulted in massive performance gains. Among the improvements was an all-new swing arm design with adjustable pivot points for more adjustability.