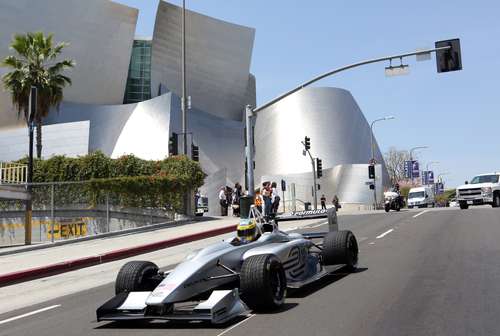 The Formula E electric car racing Championship took to the streets of Los Angeles today to preview the 2014 launch of the racing series.
Advertisement

The FIA Formula E Championship was officially welcomed to Los Angeles on Monday by Mayor Antonio Villaraigosa as part of that cities Earth Day festivities. Los Angeles is one of the 10 global host cities for the Formula E electric car racing series when it launches its first season in 2014.

Formula E's plan is to bring electric car racing to the people, holding races in city centers around the world. The Championship series is designed to promote interest and investment in electric vehicles and sustainable motoring, while at the same time having fun and demonstrating that electric cars aren't slow boring ugly golf carts.

Los Angeles was selected as a host city in part because of their robust and burgeoning electric vehicle infrastructure. Other cities hosting the series are Miami; London and Rome in Europe; Beijing and Putrajaya in Asia; and, Buenos Aires and Rio de Janiero in South America, with two locations to be announced.

“By hosting Formula E Championship races here, we ensure our place as a leader in the charge to generate awareness for electric vehicles and their benefits,” Mayor Villaraigosa said. “By selecting Los Angeles as the site of their Championship races, Formula E Holdings brings international attention to our City’s electric vehicle infrastructure programs and increased tourism revenue to our City.”

The Formula E series will feature electric race cars capable of reaching speeds over 140 miles/hr, with zero emissions. Races will last for approximately 1 hour, and feature 10 teams with two drivers each. The drivers will have two cars apiece, and switch cars during the race. So far two teams have announced they will participate, Drayson Racing and China Racing. Renault sent an announcement earlier today that they'll make an announcement on the 25th which may be their participation in the Formula E.

“We are very thankful to the Mayor and the authorities for the enthusiastic welcome they have given our Championship and are honoured to have Los Angeles on board to host Formula E and share our passion for promoting sustainable motoring,” said Alejandro Agag, CEO of Formula E Holdings. “Los Angeles’ iconic landmarks provide a perfect backdrop to bring to life the excitement of Formula E racing, while at the same time, inspiring people to believe in the electric vehicle for their own personal use. The LA race is also going to have a real positive impact on the City by creating many new job opportunities together with considerable amounts in visitor spending and of course a great sense of community pride.”