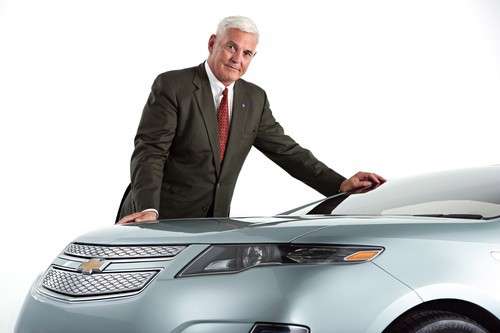 Bob Lutz, returns to his role as Defender in Chief of the Electric Car, with a piece on Forbes.com saying everything is fine, nothing to worry about.
Advertisement

The just-finished U.S. election season brought so much invective against electric vehicles one might think they were the worst thing in cars since fake wood paneling. Perhaps a validation is the "low sales" of, say, the Nissan Leaf and Chevy Volt compared to gasoline cars. Bob Lutz, former Vice Chairman of General Motors, and for all intents the father of the Chevy Volt, has returned to his Forbes.com blog, on Thursday, to say nothing has gone wrong with the electric vehicle market. Instead he says that electric vehicle sales are going just as he thought, and that there's nothing to worry about.

Lutz isn't a head in the sky dreamer, he has a long history in leading the auto industry and until being awakened to electric vehicles by Tesla Motors he was against them. He does start off the blog post with a litany of problems that have struck the electric vehicle industry this year. These include: the bankruptcy of Ener1, parent of battery maker EnerDel, in January (that company survived and is still in business); the bankruptcy of Bright Automotive in February; the fake controversy about Chevy Volt fires, that died down after a congressional hearing; the Fisker recall due to flawed A123 battery packs and other problems at A123 Systems that led to A123's bankruptcy in October and selloff to Wanxiang America in December; the Dept of Energy freezing loans to Fisker stalling Fisker Atlantic production; a layoff at Coda Automotive following poor (apparently) sales; the ouster of Better Place founder and CEO Shai Agassi, followed by the new CEO busily writing a new business plan; and the flap over Nissan Leaf battery pack capacity loss in hot climates.

With news like that what could Lutz be smoking to say everything is fine? For some reason his answer doesn't point at the return of the DeLorean sports car as an electric car, due in 2013, but a claim that the electric vehicle adoption rate is naturally going to be slow for the time being. And, that this is as he has consistently predicted. He goes on to say that until an affordable electric car ($30,000 with a 300 mile electric range) goes on the market, sales will remain slow.

Lutz doesn't directly say it, but this refers to conventional wisdom that electric cars must replicate every aspect of the gasoline car experience, and this includes that Great American Past-time the "Road Trip". While there is an electric car on the market which can do this, the Tesla Model S, it will rely on Tesla's ability to build the nation-wide supercharger network (and not go bankrupt doing so), and in any case that car is way too expensive for the average car buyer. At the same time, General Motors is doing battery research that has led their CEO to mention electric cars with 200+ mile range in the near-to-medium future.

Technically speaking most car buyers do not need the ability to Road Trip in an electric car because that's not an every-day thing for most people. However we do recognize most people think they must have Road Trip capabilities, even if they only take such trips once a year.

Lutz does point to one area of where "extended range electric vehicles" (EREV; a.k.a. plug-in hybrid) can have "fast adoption" immediately. That is in commercial fleets owning "full-size pickups, sports utilities and vans". Coincidentally, Lutz is heavily involved with Via Motors, a company who is making exactly that sort of vehicle. Why? First, fleet owners are in a better position than regular consumers to recognize savings from fuel costs. Second, these larger vehicles already "use so much fuel that the owner of an EREV version will actually save money almost from day one."

Lutz stands by his prediction that "by 2020, EVs, EREVs and strong hybrids might account for 10% of the U.S. market, or about 1.5 million units" and admits we're a long way from there even now. Eventually, he says, "the world will be populated by EVs only" without giving a strong prediction for "when" that will occur. It is a safe prediction to make, however, because battery technology improvements will eventually make this possible, and petroleum costs will eventually make it a necessity.

A final note to Bob Lutz, should you read this. Some of us in the media are interested in giving actual education to our readers.

Paul Scott wrote on December 21, 2012 - 1:43am Permalink
"It is a safe prediction to make, however, because battery technology improvements will eventually make this possible, and petroleum costs will eventually make it a necessity." Great line. This question of when the transition to electricity will happen in ernest is a good one. It's definitely slower than I anticipated, but maybe I was blinded with the knowledge that it's a fait accompli. The end is clearly renewable electricity because of the ease of generating it and the lowering cost relative to the increasing cost of oil. At some point, there will be a general consensus. When this happens some 3-5 years from now, there will be rapid growth. We can't scale up production much faster than that just yet, but that will change pretty soon. The new Nissan LEAF capacity in both Tennessee and Great Britain will sure help, but there are many more OEMs coming to market with both BEVs and PHEVs.
Nicolas Zart wrote on December 27, 2012 - 9:25am Permalink
Paul, I wonder if it's slower than anticipated because it was unrealistic form the start. In other words, I wonder if these so-called prediction were not based on the automobile's optimistic scenario that didn't take into consideration a poor economy and more. In other words, it sounds to me more MBA based statistics and stratagem that looked more like school projects than anything. When we consider the introduction of hybrids over a decade ago and see the introduction of EVs and PHEVs, considering the economy I think it turned out better than should have been expected. Nicolas

Tesla Contemplates A New Strategy for China Retail even As Sales Boom
Jay Leno on Elon Musk & EVs: “I Think He Should Get ... Credit"
END_OF_DOCUMENT_TOKEN_TO_BE_REPLACED