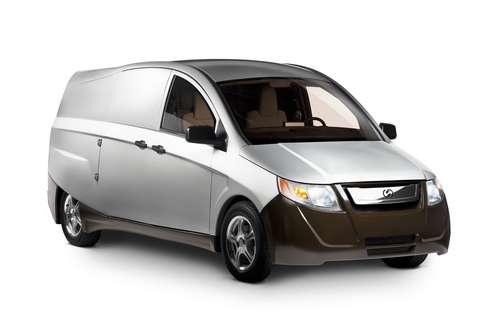 Indiana based Bright Automotive, a start-up company which hoped to sell hybrid-electric delivery trucks, has closed its doors citing outlandish terms required the Dept of Energy in the Advanced Technology Vehicles Manufacturing (ATVM) program. This makes at least the third company in recent weeks to complain about the terms of these government backed loans.

Bright Automotive was launched in 2008 from the Rocky Mountain Institute, the clean-technology analyst firm led by Amory Lovins. The companies primary goal was development of the IDEA, a plug-in hybrid delivery van explicitly focused on commercial fleets of urban delivery vehicles. In August 2010, GM Ventures, the venture capital firm operated by GM, made one of its first investments in Bright Automotive. On the heels of that announcement, Mike Donoughe, a 25 year veteran of Chrysler, joined Bright Automotive as the Chief Operating Officer. In April 2010, the company signed a contract with the Postal Service to develop and test an electric postal delivery vehicle. The company was staffed by industry veterans including some of the most experienced hybrid-electric vehicle and battery pack engineers in the industry. In short, at one time, the company was a rising star.

The Advanced Technology Vehicles Manufacturing (ATVM) program was a brain-child of the Bush Administration, and became part of the Obama green jobs strategy. Not ones to go quietly into the dark, CEO Reuben Munger and COO Mike Donoughe wrote a blistering letter to Energy Secretary Stephen Chu, detailing Bright's experience of the ATVM program.

Munger and Donoughe started off by saying "Bright has not been explicitly rejected by the DOE; rather, we have been forced to say 'uncle'", and that was just the first paragraph. Last week the company received the fourth Conditional Commitment letter since September 2010, which the pair described as containing "more onerous terms than the last" and that it "was so outlandish that most rational and objective persons would likely conclude that your team was negotiating in bad faith." Going on, the letter says that because of the Dept of Energy "lack of action", thousands of jobs which would have been created "will not see the light of day". The result is that the IDEA, which the pair says has "the lowest total cost of ownership" for fleet customers and would have saved "millions of barrels of oil each year" will not come to market.

The company entered the ATVM program in December 2008 and at that time were informed their application was "substantially complete". In August 2010 (note, the same month as the GM Ventures investment), the Dept of Energy informed the company that the ATVM loan would be approved "within weeks, not months," after being urged by the DoE to form the partnership with GM Ventures. According to the letter, company had lined up private investments, as well as an agreement with AM General for manufacturing which would have recreated 400 jobs in a plant that company had shuttered.

The pair describe the ATVM process as a "distortion of U.S. private equity markets," a charge also made by others. Calling it a "debacle", they point to the fact that only $50 million of ATVM loan money has been disbursed since October 2009, and of the total $25 billion allocated to the program, only $8 billion was invested.

In short, Munger and Donoughe delivered a blistering attack on the credibility of the ATVM program. Reading between the lines, and judging by the intense negative scrutiny being poured upon the Dept of Energy's investment programs, one can imagine that the Department had become gun-shy about granting loans or disbursing money without strict requirements meant to "protect taxpayers". Indeed CNN quotes Energy Department spokesman Damien LaVera saying "We understand that this is a difficult day for Bright Automotive and their workers. Over the last three years, the Department has worked with the company to try to negotiate a deal that supported their business while protecting the taxpayers."

Bright Automotive isn't the only company having issues with the ATVM loan program leading to business difficulty. Aptera, a California based electric designer and would-be manufacturer, ceased operations in December after failing to secure a Dept of Energy loan. A couple weeks ago, Chrysler withdrew its loan application with the Department. Henrik Fisker recently complained about Fisker's own experience with their Dept of Energy loan, after that loan was frozen due to missed milestones, forcing the company to lay off workers. Fisker, however, has been successful at raising private capital and claims their loan difficulties will be a bump in the road.

Would that Bright Automotive had been able to do the same. The claim by Munger and Donoughe is that the ATVM program "distorted" the markets such that private investors were unwilling to place investments unless there was guaranteed federal support in the form of a loan or grant. This left Bright in a sort of double bind, unable to raise private capital because the Dept of Energy loan hadn't been approved, but at the same time facing demands from the Department to raise private capital.

Is this a case of the Department being extra careful with taxpayer money, and we should breath a sigh of relief that Bright did not get a loan? Is this a sign that the Department was too gun-shy due to criticism heaped upon the loans and grants programs? Is this a sign of the tough economic times of the last three years? Or is this, as Munger and Donoughe allege, a sign of "lack of inaction" and "debacle" in the ATVM program?

Aaron Turpen wrote on February 29, 2012 - 9:23pm Permalink
I take it as a sign that the DOE shouldn't have been involved in the "loan" process to begin with.