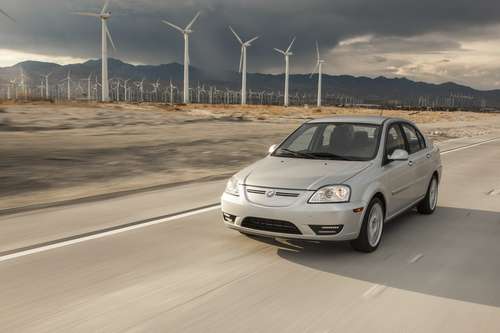 Electric car startup manufacturer Coda Automotive has laid off 50 people, 15% of the staff, for what a spokesperson describes as "rightsizing".
Advertisement

Electric car startup manufacturer, Coda Automotive, had a layoff on Friday, according to reports published on Tuesday and verified by email from a Coda spokesperson. The layoff was reported by some as "massive" but the spokesperson said there were 50 persons affected, which totaled 15% of the company staff.

The company started several years ago, derived from another electric car startup Miles Automotive. Coda has a partnership with a Chinese automaker and a Chinese battery manufacturer (Lishen). Partially finished cars are shipped to an assembly facility in Benicia CA for final integration and testing before shipment to customers. The first delivery to customers took place in mid-March 2012 with simultaneous deliveries in San Diego, Los Angeles and Silicon Valley.

At a press event in September, company management disclosed sales had been approximately 100 vehicles. As verification of that sales figure, shortly before the press event the company had to recall 78 cars due to misinstalled air bags. The company spokesperson would not verify sales figures nor speculation that sales had dried up since the recall. The car was recently awarded a 4-star crash safety rating from the NHTSA, though with the caveat that the driver gets only 2 stars.

The company issued the following statement through Forrest Beanum, SVP of Government Relations & External Affairs: "CODA has released approximately 50 employees or 15% of our workforce across all functions to streamline our operations and right-size the Company. The Company is taking this action to better position our business going forward. We remain committed to the continued development and distribution of our products."

The spokesperson verified that the layoff affected all divisions at Coda, which includes sister company Coda Energy. The organization is actually three companies, Coda Holdings as the parent of Coda Automotive and Coda Energy. Coda Automotive designs and manufactures electric cars in a partnership with Haifei Motor Co. of China. Coda has signed an agreement with Great Wall Motors to develop future electric cars expected to begin delivery in mid-2014. Coda Automotive also has a deal with Better Place to provide electric cars for an electric taxi operation for the SF Bay Area slated to go into service next summer.

According to Coda's spokesperson, that deal with Better Place will not be affected by the layoff.

Coda Energy takes the battery pack technology Coda puts into the cars, and configures those battery packs for other target markets such as grid energy storage systems. Coda Energy came into being whenCoda Holdings bought EnergyCS in Sept. 2011. The company had, in early 2010, applied for Dept. of Energy loans to assist in building a factory in Ohio to manufacture battery packs, but by March 2012 had abandoned that effort, instead planning to build the factory overseas.

The automobile market is a tough one for startup companies. There has not been a successful automaker startup in decades, namely Chrysler. All sorts of companies have layoffs and survive. For Coda to have one isn't necessarily a sign of impending doom, but at the same time this is a small company in a difficult field for startups to enter. The company has always had a spunky attitude combining social activism with entrepreneurialism, as evidenced by the Grass Station they built last summer.