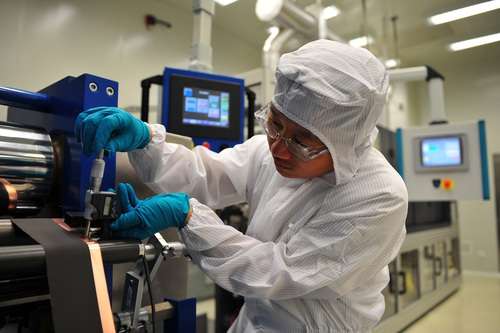 With all the uproar over Wanxiang's rescue of A123 Systems, there's another piece of battery manufacturing news in China that is worth considering. GM China has begun manufacturing prototype battery cells at its Advanced Technical Center in Shanghai. The move enables GM researchers to work on developing next generation vehicle battery systems, but also underscores the size of GM's operations in China and that company's collaboration with SAIC, one of China's largest automakers. The work at this center also validates recent statements by GM's CEO Dan Akerson over longer range electric cars.

In December 2011, GM announced the Advanced Technical Center, then under construction, would be ready to begin full operations in July 2012. The ATC first opened in September 2011, as one of GM's network of technical centers around the world. The company described the ATC as "the most comprehensive advanced automotive technology development center in China." Researchers at the ATC will work with the Pan Asia Technical Automotive Center (PATAC), an already existing facility jointly owned by GM and SAIC, and the ATC will contain these labs: China Science Lab, Vehicle Engineering Lab, Advanced Powertrain Engineering Lab and Advanced Design Center.

Production of the first batch of battery cells at the ATC, using state-of-the-art fabrication methods, is an important milestone in the establishment of its battery material assessment capability. With "battery material assessment," the company's researchers will be able to test and validate advanced materials provided by suppliers, apply innovative technologies to battery cell design and fabrication through collaboration with cell suppliers, and finally design complete battery systems for integration into plug-in vehicles.

In an announcement last week GM said the company's battery research in China would make electric or hybrid vehicles more affordable and help GM expand vehicle electrification. By conducting research based in China, the company will "build strategic partnerships with battery cell and cell material suppliers, and make purchasing decisions as a smart cell buyer."

The announcement describes GM's as accelerating the development of batteries with improved energy density, with smaller overall system size and lower cost. Plug-in vehicles will be more affordable as a result.

China is moving full steam ahead in developing clean technologies, and clean vehicles are a large part of that country's efforts. The country has made alternative energy vehicle development a state strategy, and plans to significantly increase the production of plug-in vehicles.

TPpp wrote on August 19, 2012 - 3:37am Permalink
We do need more efforts to be put into making batteries more affordable... They are holding off grows of market penetration by electric vehicle. Nice to see that more and research done in China in this field!
Anonymous wrote on December 15, 2012 - 1:50pm Permalink
GM receives 50billion dollars of taxpayer money in the form of a bailout... in addition to bailout money received GM is also allowed to pay ZERO Taxes for a undetermined number of years and this is what Americans receive in return Thanks for Nothing GM. I hope Journalists have a field day with this one