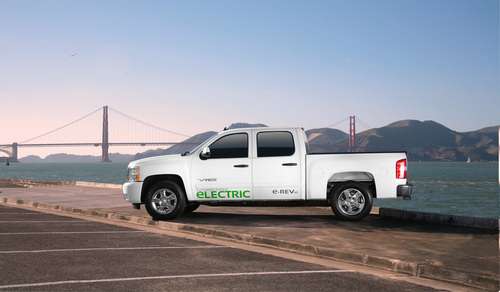 The Via Motors VTRUX plug-in hybrid (extended range electric) trucks are powerful workhorses designed for commercial fleets, and because it uses electricity as its primary fuel the fleet owner can see a large cost savings over an 8 year lease period.
Advertisement

David West, CMO of Via Motors, began his presentation yesterday to the Silicon Valley Electric Auto Association by explaining how he was able to get a free Chevy Volt. His free Volt did not come by pulling any special strings but through the simple application of economics. He then went on to explain how a commercial fleet operator could use the same idea to save a lot of money by leasing the Via Motors VTRUX. To save money while reducing environmental impact is a double win for business.

Via Motors is in the business of manufacturing plug-in hybrid trucks and vans. Because Bob Lutz is on Via's board, they use the phrase "Extended Range Electric Vehicle" to describe the design, but "plug-in hybrid" is also a correct phrase to use. Via Motors gets engineless trucks from GM and installs a plug-in hybrid drive train. The VTRUX carries a gasoline engine paired with an electric which jointly forms a 150-kilowatt electricity generator. That generator is not only used to recharge the battery pack when the state of charge runs low, but the truck has an inverter and power outlets for both 120 volts and 240 volts allowing the VTRUX to provide portable power sufficient for a contractor to power a job site. The 24-kilowatt-hour battery pack provides 40 miles of electric-only driving range.

Via Motors has designed the VTRUX drive train to allow it to be installed in a range of trucks from the pickup like the Chevy Silverado, up to vans and shuttles, and the company is beginning to develop designs for larger big trucks.

On a brief drive of a Chevy Silverado 1500 based VTRUX following the meeting, it was apparent that Via's trucks are very powerful. It accelerated extremely well, quickly reaching 60 miles/hr. This truck also had GM's four-wheel drive with which, when engaged, it became a powerful pulling machine.

How did David West get a free Chevy Volt, and how does that apply to save a lot of money by leasing a VTRUX? It has to do with saving money on fuel and maintenance. West's commute of 40.1 miles is, if driven carefully, within the electric-only driving range of the Chevy Volt he is leasing. This means he can charge at both home and office, driving 80-100 miles a day, while not burning a drop of gasoline. This is the key to getting a Free Chevy Volt. The gasoline-powered car he drove previously for the same commute cost $480 per month just for the gasoline. The electricity to power his commute costs $35/month, which by itself equates to $445/month savings on energy. The total savings, including smaller maintenance charges, is more per month than the cost of the lease on his Volt, making it a Free Volt.

The same equation works for commercial fleet owners, all of whom know to the penny what it costs to own and operate a fleet of trucks. Commercial fleet owners are in a better position to recognize the economic benefits of electric or hybrid vehicles than is the typical consumer.

The Life Cycle Savings Calculator on the Via Motors website shows the details of how this works. The calculator is only considering the Lease, plus Energy plus Maintenance costs, so it falls a step or two short of a complete total cost of ownership. However, because it is focusing on a Lease arrangement, most of the total cost of ownership is carried by the leaseholder rather than the fleet operator.

The first item to note is the federal and state tax incentives for purchasing or leasing a Via Motors VTRUX. The truck does qualify for those credits, and they are carried in the lease terms.

The calculator allows one to see the effect of varying the number of miles driven per year, the cost of electricity, and the cost of gasoline. It becomes clear, after fiddling with the sliders for a while, that the main cost-benefit is the price of gasoline. While changing the other factors affects the savings potential, the main determiner of that savings is the cost difference between gasoline and electricity as a fuel. We noted last winter that electric cars are cheaper to drive than gasoline powered ones, an observation confirmed by Consumer Reports. Bob Lutz and the VTRUX recently appeared on Jay Leno's Garage with the same message (see Love the truck, shuck the fuel bill). This has to do with how many miles one can drive on electricity or gasoline, and electricity is more cost-effective than gasoline.

The Via Motors calculator has an interesting chart concerning the cost of gasoline. It shows a 15-year trend in gasoline prices showing, on average, a 7.5% increase in cost per year. With that rate of increase, in 8 years gasoline will cost $5.34 per gallon. While in the short term gasoline prices rise and fall due to various effects, the general trend for the last 15 years has been an ever-increasing price in gasoline. The core facts behind the ever-increasing price of gasoline are a) the U.S. has a tiny percentage of world oil reserves, b) peak oil.

In addition to saving money on fuel, for the right sort of fleet owner the Via Motors VTRUX platform offers additional savings. Namely, it avoids the need to carry a portable generator. For example, a constructor could, instead of carrying a generator to power the tools, simply plug the tools into the VTRUX. Between the extra-large battery pack, and the 150-kilowatt generator, the VTRUX has the capacity to power quite a lot of equipment, plus it has the towing capacity to haul that equipment to a job site.

One of Via Motors' customers, PG&E, the electric utility for Northern California, envisions using the VTRUX to provide portable emergency power to resupply neighborhoods whose electricity has been cut off.