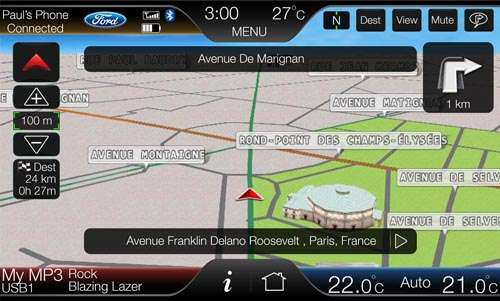 Ford and Cambridge designing vehicles for the visually impaired

My first reaction when I saw a press release from Ford on designing vehicles for the visually impaired was “they’ve got to be kidding.” After I read it, though, I decided it made good sense. They’re not talking about designing cars for people who can’t see the road, but for people who have trouble seeing fine details. The statistics Ford cites show that this is an important design factor and will become more important over the next several years. According to the World Health Organization, there are 285 million people around the world with visual impairments. Around 65 percent of them are over 50. While 17 percent of the European population was over 50 in 2007, that number is expected to be closer to 25 percent by 2030.

As we get older, we have more trouble picking out fine details and more trouble seeing in the dark. So unless we’re wearing bifocals, we may have trouble reading the instrument panel. Add to this the increase of cataracts, glaucoma, and age-related macular degeneration (AMD) in those over 50, and there’s a lot of people for whom up-close vision can be a struggle. “Visual impairment is a natural part of ageing and affects many millions of people around the world,” said Angelika Engel, ergonomics attribute specialist at Ford of Europe. “But because it is such a gradual process, it can often go unnoticed for many years. We tend to subconsciously look around the problem until it reaches a point where it is so severe that it can no longer be ignored. Even conditions like AMD and glaucoma can come on very slowly.”

How do you design a solution for a problem you don’t have? That’s where the experts at the University of Cambridge’s Engineering Design Centre come in. They’ve built a Vision Impairment Simulator that allows engineers and designers to see the effects of visual impairments for themselves.

"It allows you to simulate visual impairments on any image. You load in an image, select a visual impairment and it lets you see the image as someone with that impairment would see it,” said Sam Waller, an inclusive design research associate at Cambridge, who developed the software. “You can then load in other designs and instantly compare the effects, or you can change the impairment and see how the design stands up to different problems.”

Ford’s taking advantage of the software to optimise its instrument displays, making sure they can be easily read by as many people as possible. In the past, they’ve used goggles to simulate cataracts, but the new system is better. “The goggles are a very useful tool, but this software is a big leap forward because it lets us simulate so many different impairments and levels of severity,” Engel said. “For example, if we were to load in an image of a display and process it for red-green colour blindness, you might instantly see that some numbers and letters become a lot harder to read. We can then change the design accordingly.

“There are many people with vision problems that still can drive and we want to make it as safe and easy as possible,” Engel said. That’s good for all of us.

Tesla-Funded Research Reveals One of The Biggest Mysteries of EV Battery
Tesla Tesla Buyer Nets a Whopping $12,000 Discount After Asking for Reduction
END_OF_DOCUMENT_TOKEN_TO_BE_REPLACED