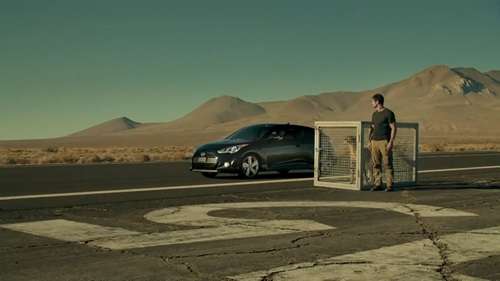 Hyundai is set for a marketing blitz during the Super Bowl. It is going to be airing a total of five game-day ads for the big game, which airs on February 5th.
Advertisement

Hyundai has an impressive lineup of new vehicles. It is clear with this marketing blitz they are attempting during the Super Bowl, they are definitely pushing to strengthen the brand's image and customers.

The five-ads slated to air on Super Bowl Sunday will include two pre-game spots, one in the highly rated pre-kick time slot and two ads slated for in-game air time.

“Cheetah,” a 30-second spot which will air in the first quarter of the game, will feature a caged cheetah pitted to race against the new and widely acclaimed 201-horsepower Hyundai Veloster Turbo. The car launches and the cage opens, but after racing against the Veloster, the big car realize winning is not possible. The cheetah then decides to take his frustration out on the handler.

Another 30-second ad which will air in the fourth quarter of the big game, “Think Fast,” introduces a character that will be featured in future Hyundai’s social media campaigns, Bob. The ad shows a young professional is driving his boss, Bob, in his Genesis Coupe R-Spec. Bob is about to deliver a words of wisdom to the young man, when he suddenly falls faints. The young driver hits the brakes hard, then throws his Genesis Coupe into drive repeatedly, generating enough force to revive Bob. Then he finishes delivering his piece of advice.

“In developing this year’s in-game creative, we recognized the brand has built a strong reputation for great value, fuel economy, warranty, safety and quality – all the rational attributes for buying a vehicle. Typically, Hyundai hasn’t been top-of-mind with shoppers looking for performance and modern design – attributes that inspire an emotional connection,” said Steve Shannon, vice president of Marketing for Hyundai.

Another commercial titled “All For One,” will be 60-seconds long. This will air at the pre-kick time slot, seconds before the game begins. Hyundai feels this add reflects the company's motivation to succeed. The ad will feature over 200 actual Hyundai team members from the Hyundai Plant in Alabama which builds Sontatas and Elantras. They will be singing along to the the unforgettable theme song from Rocky “Gonna Fly Now.” written by Bill Conti, Carol Connors and Ayn Robbins. Luckily all the team members had vocal training for the ad.

The last ads on game-day will be “Victory Lap”, which will celebrate Hyundai's achievement winning the 2012 North American Car of the Year for the Elantra. Hyundai won this prestigious award at the Detroit Auto Show, showing-up the Big Three automakers on their own turf. Also “Faster Acting” which will showcase the new 429-horsepower Hyundai Genesis R-Spec sedan.

The campaign also features interactive and digital content throughout, including outtakes, online extensions and social media engagement. So fans of the ads can experience more of their favorite Hyundai ads and even become potential customers. Exactly what Hyundai and any Super Bowl advertiser hopes for.

For more information and making-of videos of the ads, visit Hyundai's Youtube channel.