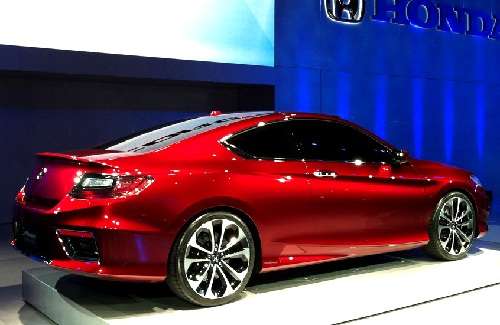 Honda Accord Coupe at NAIAS May Be The Best Since 1994

Honda has unveiled the Honda Accord Coupe Concept at the North American International Auto Show (NAIAS). This provides a look at what the production ninth-generation 2013 Accord will look like, which is set to go on sale this fall.
Advertisement

The last time Honda Accord was redesigned was in 2008. Thus, this is a welcome addition to freshen up Honda's lineup. The new Accord looks a bit more muscular than the previous version. Honda is clearly at least taking cues from current design trends.

"The Accord coupe made a grand entrance at NAIAS when it rolled out to the stage with red paint so stunning it looked lickable. Some new chrome trim accents and integrated rear decklid spoiler were among the additions to this already popular model. Personally I think it's the best Accord looking Accord coupe we've seen since the 1994-1997 model year." said Tyson Hugie from Scottsdale, Arizona, who attended the show. (He also took the accompanying picture to this article. Thanks Tyson!)

You can see the front bumper's dynamic lines are highlighted by a revised four-sided honeycomb grille and deeply set multi-reflector headlights. Lower fog-light spoilers are accented by crystallized chrome inlays.

The 2013 Accord will feature a few different engine options, which includes a Hybrid, an inline 2.4 liter four-cylinder, and 3.5 liter six-cylinder.

The Hybrid comes equipped with a 6 kilowatt-hour lithium-ion battery and a powerful 120 kW electric motor. The all-electric range is around 10-15 miles in city driving scenarios with a top speed of 62 mph. Fully recharging the battery will take less than four hours using a 120-volt, outlet and less than 1.5 hours using a 240-volt charger.

The Hybrid will feature the first application of a new two-motor plug-in hybrid system to the Accord Sedan. The Honda two-motor hybrid system moves continuously through three modes - all-electric, gasoline-electric and direct-drive - to maximize driving efficiency and fuel economy. The gas engine mated to the electric motor will be 2 liter inline 4-cylinder.

The 2013 Accord is featuring new safety features too. Among the new features will be Honda's first application of Lane Departure Warning (LDW) and Forward Collision Warning (FCW) technology. Both systems use a camera mounted behind the windshield to alert drivers if the car is moving out of its lane or to warn drivers of a potential collision in front of them.

"Marking the 30th anniversary of U.S. production, this new ninth-generation Accord will raise the bar again through a tour de force of new Honda powertrain and safety technologies, geared to ensure that Honda and the Accord continue to lead in fuel economy, safety and fun-to-drive performance," said John Mendel, executive vice president of sales for American Honda.

Can't disagree with Mr. Mendel as the Accord has proven time and again that they deserve the large sales numbers for the mid-sized sedan segment.

Honda suffered some setbacks in 2011 due to the flooding in Thailand disrupting global production and the Earthquake an tsunami that devastated Japan. Accord and Civic production were among the cars that were built in the plants in Thailand. It seems in 2012 Honda wants to regain sales momentum and not let domestic automakers catch ground.

There have been more than 11 million Honda Accord units sold in the US since 1976, when the car was introduced. With the Honda Accord entering it's ninth-generation, Honda seems to be on the right track with the new Accord.