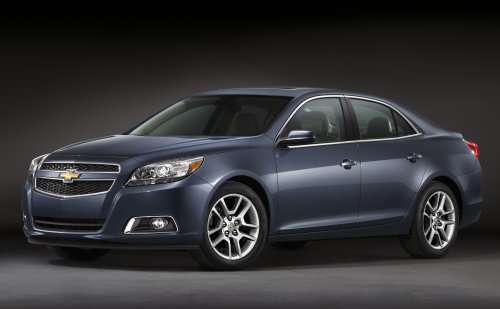 Tom Slopsema, the Noise & Vibration Engineer made a revolutionary Ecotec 2.5L engine change to the 2013 Chevy Malibu. Slopsema made big improvements on the engine to reduce the engine noise in many ways; one by adding microphones to the engines.
Advertisement

Slopsema shared that the goal when developing the 2013 Chevy Malibu was "to get big improvement in engine noise and benchmark levels”. The 2013 Chevy Malibu had changes made from everything from moving the noise to a higher frequency, redesigning the balance shaft, to the cam cover on top of the engine.

Many noise tests were done with the 2013 Chevy Malibu to ensure quality and efficiency of the improvements. Engineers looked at all sorts of noises radiating off of all surfaces of the engine; from taps to rattles. They set up microphones in several places around the engine in order to pick up the exact noises and reduce them -allowing for a quieter vehicle interior cabin.

Engineers of the 2013 Chevy Malibu have also worked on making a more pleasing engine noise for the customer to experience while driving. Engineers understand that customers don’t enjoy roughness, coarseness or granularity while driving, and so they set out to make the engines emit more refined noises which are as quiet as possible under the hood.

Another change to the 2013 Chevy Malibu was in making the vehicle cabin as quiet as possible. Tom Slopsema shared that he could get into one of the Malibus and drive at highway speeds and not hear the engine. He said that even when he “punched it,” he got a “precision pleasing sound.”

The 2013 Chevy Malibu is set to go on sale in the spring of 2012. Its estimated base price starts at $24,000-$28,000 and its main competitors are the Ford Fusion, Honda Accord, Hyundai Elantra, Kia Optima, Nissan Altima, Toyota Camry and Volkswagen Passat.

The 2013 Chevy Malibu has a 2.4-liter I4 with electric hybrid assist, 182 hp, 172 lb-ft , 6-speed auto, FWD, EPA Fuel Economy of 26 city and 38 highway. This is the eighth-generation of the Malibu and has global midsize architecture with wider tracks, a stiffer structure and better steering and brakes compared with the previous generation. It comes equipped with a full suite of safety equipment, including standard stability control and 10 available airbags.