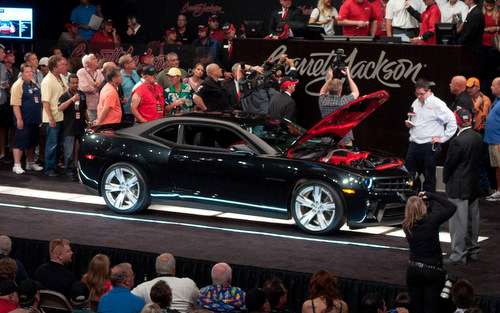 The first production Chevrolet Camaro ZL1 to be offered to the public was sold at the Barrett-Jackson auction in Las Vegas yesterday for $250,000 with the proceeds benefitting the YMCA of Southern Nevada.
Advertisement

The first Chevrolet Camaro ZL1 was sold to the public yesterday for $250,000 at the Barrett-Jackson auction in Las Vegas. It was sold by a GM dealership called Fairway Chevrolet-Buick-GMC in Las Vegas, with all of the proceeds benefitting the YMCA of Southern Nevada. The particular vehicle sold was bathed in Carbon Flash Metallic, the only Camaro ZL1 that will be painted in that color. It is the 69th Camaro ZL1 built at the Oshawa assembly plant in Canada in honor of the original 1969 Camaro ZL1, of which on 69 were built.

Fairway Chevrolet president Greg Heinrich said "Our family has been involved with the YMCA for more than 25 years. I have seen firsthand how the Y helps young people, families, and seniors in our community." The vehicle was sold to Rick Hendrick, owner and chairman of Hendrick Motorsports and Automotive Group, and he will take delivery of the vehicle in the early part of next year.

The 2012 Chevrolet Camaro ZL1 will be the flagship of the Camaro line. It pays tribute to the aforementioned 1969 Camaro ZL1, which had an eponymous 427 c.i. all-aluminum big block V8 that was developed as a racing engine for the Can Am series and appeared in historic race cars like the Chaparral 2F.

Even back then, it was rated at 430hp, although it was actually believed to produce around 500hp. The new Camaro ZL1 will have a 6.2L LSA V8 engine that will be supercharged to a ridiculous 580hp and 556ft-lbs of torque.

"Like the original, the 2012 Camaro ZL1 introduces a performance benchmark for the street and the track," said Russ Clark, marketing director for Chevrolet performance cars. “Offering the 69th Camaro ZL1 at auction was a fitting tribute to the 1969 model, and a great way to benefit such a worthy cause as the YMCA.”

LG's New EV Battery Plant Is a Welcome News for Tesla
Tesla Giga Berlin's New Hurdle: It's Not Only the Gov't, but Now Tesla Itself
END_OF_DOCUMENT_TOKEN_TO_BE_REPLACED