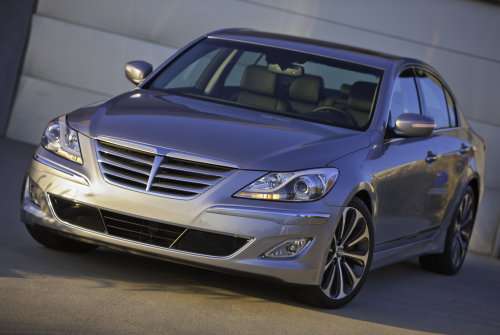 Designed to compete with the Lexus ES 350, Cadillac CTS Sedan and the Lincoln MKS, the Genesis is a rear-wheel drive, full size, four door sedan. The Genesis is also available as a two-door coupe. Both the sedan and coupe are assembled in Ulsan, South Korea.

All three engines for the sedan feature aluminum block and heads with dual overhead cams, variable valve timing for both intake and exhaust, and direct gasoline injection. All sedan models come standard with a new 8-speed automatic transmission, which has been internally tested to increase power transfer efficiency by 6%. The new transmission features “Shiftronic”, allowing the driver to override the automatic function with manual up and down shifting. The suspension has tuning enhancements to its five-link front and five-link independent rear set-up, including refined damping and larger front and rear sway bars, depending on trim level. Braking improvements to the 3.8 and 4.6 models include larger rotors and new 4-piston calipers.

Hyundai considers the R-Spec sedan to be its “flagship” car, with its most powerful engine ever. The 5.0 Tau V8 produces 429 horsepower at 6,400 rpm and 376 lb. ft. of torque at 5,000 rpm. The Tau V8 has been named one of Ward's Ten Best Engines for the third consecutive year.

Hyundai has been selling cars in the US for 25 years and is continuing its presence stateside with a manufacturing facility in Alabama, engineering facilities in Michigan, and design, research, and testing grounds in California.

Hyundia dealers... wrote on June 3, 2011 - 6:39pm Permalink
The Hyundai Genesis is a great deal; it offers luxury and refinement while being more affordable than entry level Bmw and Benz. Their warranty program is quite good too.