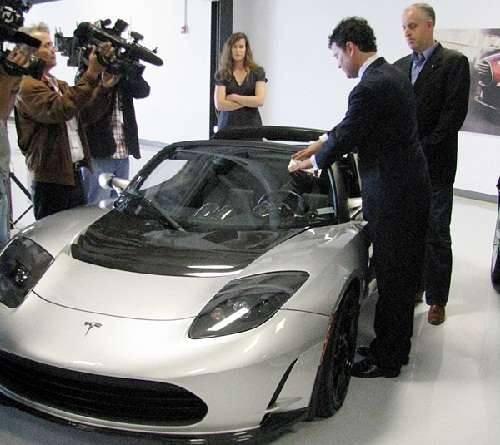 The Tesla Roadster 2.5 has become iconic for "best of both worlds." The stylish six-figure sports car not only delivers the equivalent of an almost unbelievable 124 miles per gallon on an electric charge but also is expected to snag a perfect greenhouse gas and smog emissions rating from the U.S. Environmental Protection Agency.
Advertisement

"We don't know of anybody better," said Camille Ricketts, communications director for Tesla Motors Inc., about the Roadster's incredible numbers.

Tesla, with EPA officials on hand, shared the startling numbers for the energy-efficient, environmentally friendly Roadster Wednesday at a press ride-and-drive event in Palo Alto, Calif. While the stats on the car are almost an industry secret, they are known to the 1,650 people who have paid $109,000 to buy the 2.5 version of the car.

"Looking at the true cost of gasoline – not just at the pump, but the cost in terms of our national security, our economy and the environment – electric vehicles (like the Roadster) simply make the most sense,” said Diarmuid O’Connell, Tesla VP of corporate development.

“Tesla is committed to putting as many affordable electric vehicles on the road as quickly as possible to end our reliance on foreign sources of oil and reduce the economic shocks that are driven by the volatility of oil prices.”

Tesla used the backdrop of its flashy cars to hail the amazing mpg milestone and to praise the vehicle's smog and greenhouse gas "10" rating. The numbers were documented in a mocked up EPA mileage window sticker format that was introduced by the EPA earlier in the day.

The window sticker for the Roadster is unofficial. It was prepared by Ricketts and not verified by the EPA, EPA spokeswoman Mary Simms said Wednesday night.

"The EPA has not yet released the specifics for how this car would be rated, so I wouldn't be able to confirm that the info ... is accurate," Simms said.

The car goes 124 mpg on the highway and 112 mpg in city driving, or an average of 119 mpgs, on one charge, Ricketts said. Tesla says the Roadster travels 245 miles per eight-hour charge-up.

“Smart energy policy, advanced engineering and technology are working together to move the auto industry forward,” said EPA Regional Administrator Jared Blumenfeld. “The Obama administration delivered the first-ever tailpipe greenhouse gas-emission and fuel-efficiency standards. What we are doing today, with the new labels, is helping the American public make decisions that can reduce the burden on their pocketbooks, and the burden on our environment.”

Tesla was chosen as the backdrop, Simms said, partly because its cars are so environmentally friendly. Stock for Tesla Motors rose 8.46% Wednesday on the Nasdaq exchange as the event was going on in California.

JayRod wrote on May 25, 2011 - 10:30pm Permalink
124 MPG....gallon of what, electrons?
MikeG wrote on May 26, 2011 - 2:25am Permalink
MPGe - Miles per gallon equivalent "The ratings are based on EPA's formula, in which 33.7 kilowatt hours of electricity is equivalent to one gallon of gasoline, and the energy consumption of each vehicle during EPA's five standard drive cycle tests simulating varying driving conditions." http://en.wikipedia.org/wiki/Miles_per_gallon_gasoline_equivalent
Anonymous wrote on June 9, 2011 - 12:59am Permalink
As usual, the EPA is clueless as to how electric cars' mileages should be presented. For some bizarre reason, they try to equate gasoline with electricity in order to show "energy used" which is a totally meaningless statistic. Who cares how much energy is used? The issue is carbon emissions, not energy per se. And telling you that you can get 33.7 kilowatthours worth of power out of a gallon of gasoline is utter nonsense. If you could, a gas powered car would get over 130 MPG! A gas powered car extracts only a small percentage of the energy contained within a gallon of gasoline. Most of it goes into making heat. An electric car's mileage should be expressed the same way as it is for gas powered cars - distance travelled per unit of fuel. For an electric, EPA folks, that's miles per kilowatthour, the stat that everyone else on the planet is using. I recommend elimination of the EPA. It's quite obvious that they have nothing to keep them busy - they have been wrestling with electric car window stickers for over 2 years now and have come up with this garbage.