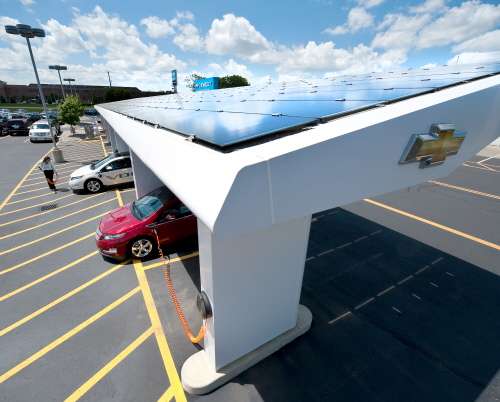 Sunlogics has built a 140,000-square-foot building in Oakland County, at a site that was once owned by the Dana Corp.

The company is creating 200 jobs and investing $30 million in the suburban Detroit site and expects to generate $90 million in annual revenue from there. Sunlogics considered located in Ohio and Illinois before selecting Rochester Hills, a tony suburb on the northernmost fringe of Metropolitan Detroit. Sunlogics also is building a production plant in nearby Ontario that will create 110 jobs in Canada.

“We appreciate GM Ventures’ significant commitment to Sunlogics and Sunlogics’ decision to locate its headquarters in Rochester Hills and Oakland County.”

Besides giving Sunlogics significant work, GM Ventures has invested $7.5 million in Sunlogics, which will put some of that money toward the creation of the headquarters.

“The partnership provides a new level of opportunity to the larger scale industrial solar projects Sunlogics designs, manufactures and constructs. We are looking forward to further assisting our customers in reducing their carbon footprint with sustainable renewable energy.”

GM Ventures is a subsidiary of GM. Its function is to help identify and develop innovative technologies in the automotive / transportation sector.

“Global solar energy use is predicted to more than double by 2016, so we believe that investing in renewable energy is a smart and strategic business decision,” said Jon Lauckner, president of GM Ventures. “And the Chevrolet solar charging canopy project complements our electrification strategy that started with the Chevrolet Volt by helping our cars live up to their fullest green potential.

“The investment in Sunlogics (maker of the charging canopies) allows GM to strategically partner with a leading solar developer and operator that can help GM drive the use of solar, specifically large-scale solar installations at our facilities. Sunlogics was the ideal choice because it is a vertically integrated company that has a global footprint.”

As TN's Don Bain reported in an earlier report, GM derives 1.4 percent of its U.S. energy consumption from renewable resources and is committed to doubling its solar output globally – from 30 megawatts to 60 megawatts by 2015, “which is equivalent to powering 10,000 homes annually,” said Mike Robinson, GM vice president of energy, environment & safety policy.

“Not only does renewable energy make good business sense, (but also) it helps us continue to reduce the impact our facilities have on the environment,” Robinson said.

The brand has three of the largest automotive rooftop solar power installations in the United States, and the world's largest rooftop solar installation at its car assembly plant in Zaragoza, Spain. Additionally, GM has started construction on a new solar field at its Detroit-Hamtramck facility and completed construction on a solar array on top of its Baltimore Operations facility.

The deal happened in part because of Oakland County’s strategy of targeting high-tech businesses to help diversify the economy and offset manufacturing losses. The "Emerging Sectors" strategy created by the county executive has brought 186 companies to the county that have invested $1.7 billion, created or retained more than 35,000 jobs and generated taxes of $43 million.