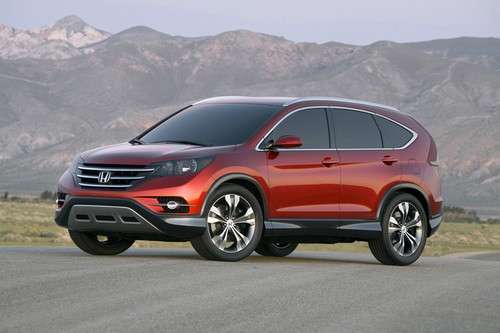 The fourth-generation street Honda CR-V will be in dealer showrooms by December, and today's introduction of the 2012 Honda CR-V Concept shows off the style future Hondas will follow.
Advertisement

The first people to get an in-person peek at the concept will be in California, when the car is put on display at the Orange County International Auto Show in Anaheim in September.

"The 2012 CR-V Concept introduces the exterior styling for the more sophisticated and dynamic design of the upcoming production model," said John Mendel, executive vice president of sales for American Honda.

"Long considered the benchmark for packaging and user-friendly design in the small SUV segment, the all-new CR-V will offer an added dimension of style, amazing interior versatility and Honda's latest technologies for convenience and refinement."

The CR-V Concept delivers a bold new style for America's best-selling sport-utility vehicle. The concept is more aggressive than the current CR-V with deeper sculpting of body lines and a more intense front fascia.

The cosmetic change is dramatic. As Honda tells it in today's statement: The front bumper's smooth-flowing lines are highlighted by a horizontal three-bar grille and deeply set multi-reflector headlights. The lower front bumper wraps smartly upward to convey SUV capability with a generous approach angle, while the lower front bumper design now integrates more smoothly with the fascia for improved aerodynamics. The CR-V's signature vertical rear taillights remain for 2012 with a more three-dimensional style that wraps further into the design of the vehicle. The CR-V Concept's large 5-spoke machined alloy wheels and bold fender flares emphasize the vehicle's dynamic presence and capability.

The 2012 CR-V weighs less than last year's model and is more fuel-efficient. Besides the bolder styling, the 2012 CR-V will have a more spacious interior design and a lower cargo floor.

At present the CR-V, manufactured at Honda's East Liberty plant in Ohio, is selling at a record pace, continuing a longtime trend. From 2007-10 the CR-V was the best-selling SUV in America.

Its accolades are many. The CR-V was among the highest-ranked vehicles in its segment for initial quality in J.D. Power & Associates' 2011 Initial Quality Study, where it finished second to the Honda Element in the compact SUV segment. The East Liberty plant earned a Silver Award for outstanding quality in the same J.D. Power quality study.

The CR-V is sold in more than 160 countries throughout North America, South America, Europe, Asia and Africa.

Roman Rosa wrote on July 25, 2011 - 5:00pm Permalink
Wow, the new CRV concept is dramatically better looking than the current model. I can only hope it makes it into production as is.

Elon Makes a Cybertruck Statement With an Action, But Quiet in Words
Tesla's Record Month in China: Doubled Registrations in March 2021
END_OF_DOCUMENT_TOKEN_TO_BE_REPLACED