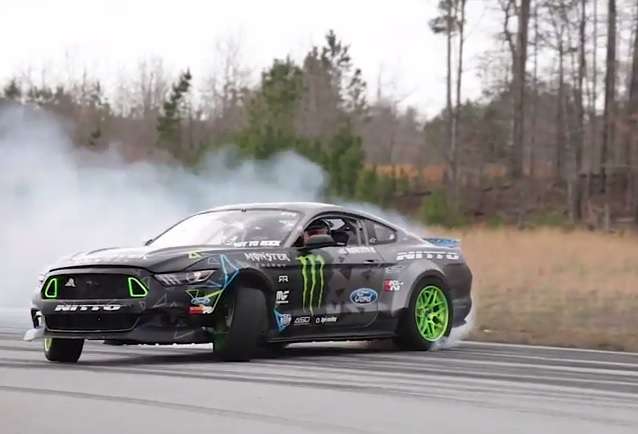 Vaughn Gittin Jr has a new Ford Mustang drift car for the 2016 season and ahead of the start of the Formula Drift season this weekend in Long Beach, the former champ made a short video showing the new Monster Energy muscle car action.
Advertisement

The Ford Mustang that Vaughn Gittin Jr will drive for the 2016 Formula Drift season is loosely based on a production car, but there are very few components shared with the Mustang GT at your local dealership. Gittin’s car has lightweight body panels, a stripped out interior with a roll cage, a drift-prepped suspension, steering and braking system and – of course – a high performance V8 engine.

The short vitals of this Competition Spec Mustang RTR are 2,800 pounds and 900 horsepower, making it one wicked muscle car. That engine has been built to rev up to 9,000rpm, allowing the car to create a symphony of engine sounds that will put a smile on any muscle car lover’s face.

2016 Ford Mustang RTR Competition Spec
When Vaughn Gittin Jr takes to the track in Long Beach, California this weekend for the first event in the 2016 Formula Drift series, he will be competing in his brand new Ford Mustang RTR race car. Yesterday, Gittin took his Mustang race car to an undisclosed location for the first shakedown of the new setup and while there – they had a few people with cameras shoot video of the action.

If you are familiar with Vaughn Gittin Jr, his work and his Mustang, you likely know what to expect, but if you are new to his driving wonders, be prepared for lots of crazy sideways drifting at high speed and a serious rolling burnout. While watching the video, take notice of how much steering angle he can achieve with his race car, essentially allowing him to steer and control the car even when it is completely sideways.

Gittin and his Mustang will look to take home his second Formula Drift championship in 2010, after becoming the first American to win in the ranks of D1 Drift Grand Prix. He is arguably the best American drifter ever, so it is fitting that he competes in the Ford Mustang. I have had the pleasure of riding along with Vaughn Gittin Jr in his older Mustang race car, as well as a few road-going Mustangs, and as amazing as his maneuvers look on film – it is even more incredible from the passenger seat. This video shows just a little of what he can do and the sound is part of the fun, so crank up your speakers and enjoy!