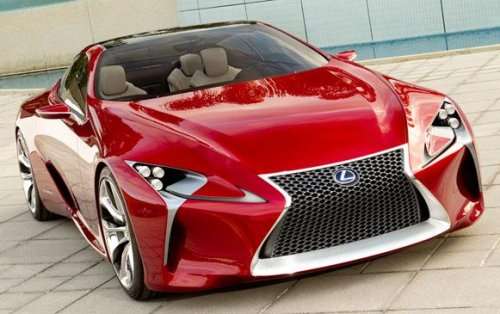 The news of a sporty coupe coming to the Lexus display at the 2012 North American International Auto Show has created quite a bit of buzz over what exactly we would see from the Japanese luxury brand next week in Detroit but today, the company has taken the wraps off of the new Lexus LF-LC Hybrid Sport Coupe Concept.
Advertisement

There is good news and bad news with Toyota’s official statement today on the new Lexus LF-LC Hybrid Sport Coupe Concept. The good news is that we know now that it is a hybrid and there are two new, official images. The bad news is that no real information was offered so while we know what this sleek new hybrid sports coupe looks like – we still don’t have any specifications to know whether it is more sport, more hybrid, or a smooth combination of the two in a luxurious package.

What we do know now is that the new Lexus LF-LC Concept is a sleek, sporty 2+2 (four passenger) coupe powered by an Advanced Lexus Hybrid Drive system. Unfortunately, we do not know if the drivetrain is similar to the 1.8L 4-cylinder hybrid drivetrain from the Lexus CT200h, the 3.5L V6 hybrid setup from the GS450h, or some new hybrid powerplant that we have not seen in a previous Lexus model. We also know (and have for some time) that the Lexus LF-LC Concept was designed at the automaker’s Calty Design Studio in Newport Beach, California and it will make its grand debut this coming Monday at the 2012 North American International Auto Show in Detroit.

Now that we have our first good, clear look of the new Lexus LF-LC Concept, we can see the distinct lines of the Lexus LF-A supercar – especially in the side profile through the greenhouse and rear end of the car. Also, like the LF-A, the new LF-LC Concept has a long front end with a wide, low stance that just screams performance car. The super high tech front end with the open-component projection style headlights and that gigantic grille opening aren’t likely to see production any time soon but they all come together to make for one powerfully sharp design. Based on the fact that this new Lexus Hybrid Concept sports the basic exterior design of the LF-A supercar and even derives part of its name from the 562 horsepower monster, we would expect that the LF-LC would offer enough performance to back up the sporty aspect but with the help of Toyota’s advanced hybrid systems, perhaps this could someday become the first true hybrid sports car that is both powerful and fun to drive while also being able to afford the incredible fuel economy of today’s hybrid vehicles.

The Lexus press conference at the 2012 Detroit Auto Show is planned for 1:25pm on Monday and at that point, we should have a good idea at what makes the LF-LC Concept tick – and whether or not this will really be a performance hybrid or just a new hybrid in a sporty package.

Check out the gallery on the right by clicking the thumbnails for a closer look at the Lexus LF-LC Hybrid Sports Coupe Concept and stay tuned to TorqueNews for all of your 2012 Detroit Auto Show news!