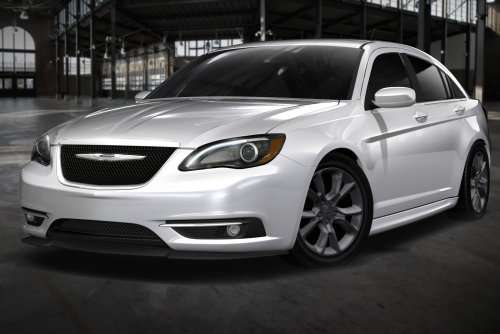 The Chrysler Group’s aftermarket/performance division ‘Mopar’ will once again have a heavy presence at the Detroit Auto Show, with the Dodge Charger Redline that we announced earlier today accompanied by the Mopar modified version of the new mid-sized sedan – the Chrysler 200 Super S by Mopar.
Advertisement

“The Super S is Mopar’s interpretation of the Chrysler 200,” said Mopar President and CEO Pietro Gorlier. “The extensive list of high-quality Mopar parts enhances the performance and appearance of our Chrysler 200.”

The 2012 Chrysler 200 Super S by Mopar in stage two form begins with all of the exterior modifications from the Super S stage one package but Mopar adds some go fast goodies to allow this 200 to outperform a standard Chrysler 200. Stage two adds a sport tuned coil-over suspension package that allows the car to handle better while also lowering the mid-sized sedan for a sportier look while a cold air intake package and cat-back exhaust setup help the 3.6L Pentastar V6 to breath. Unfortunately, no estimate is given as to how much power is gained by the cold air intake and the exhaust system but based on other Mopar exhaust systems I’ve experienced – this 200 Super S exhaust system should add lots of throaty grumble in addition to any added power.

The dark-painted Chrysler 200 Super S that Mopar brought to the 2011 Detroit Auto Show received a great reception so it is no big surprise that the Mopar division has put together a more production-friendly package for those who want a more aggressive and sporty look from their new mid-sized Chrysler sedan.

The 2012 Chrysler 200 Super S by Mopar will join other big Detroit debuts such as the Dodge Charger Redline (click here for more on the Charger Redline) and the all new 2013 Dodge Dart. TorqueNews.com will be out in force at the 2012 NAIAS at Cobo Hall, bringing you a look at the various displays and the biggest debuts of the Detroit Auto Show!

Check out the gallery on the right by clicking any of the thumbnails for a look at the Chrysler 200 Super S by Mopar – both in Concept form from 2011 and the production model that will debut next week at the 2012 NAIAS!

Tsingshan's Threat to Tesla: EV Maker Is In Battery Crosshairs
Tesla-Funded Research Reveals One of The Biggest Mysteries of EV Battery
END_OF_DOCUMENT_TOKEN_TO_BE_REPLACED