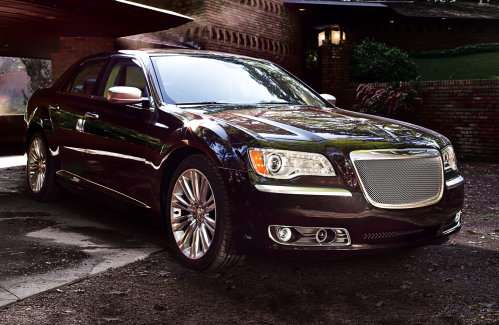 The Chrysler brand has made an increasingly strong push towards being a luxury automaker over the past few years and with the introduction of the 2012 Chrysler 300 and 300C Luxury Series sedans – they look to dive deeper into the luxury segment with new appointments and incredible fuel economy with a price well below the competition.
Advertisement

The 2012 Chrysler 300 Luxury Series lineup begins with by dressing up the brawny flagship sedan on the outside with the new Platinum Chrome trim throughout the prominent grille, on the front fascia, side mirrors, and door handles as well as new 20” polished face wheels on the rear wheel drive models. All wheel drive 2012 Chrysler 300 Luxury Series models get their own unique wheels, measuring 19” and featuring painted pockets and a polished face. The 2012 300 and 300C Luxury Series also benefit from all of the goodies found on the other 300 models including the new LED projection headlight assemblies, projection fog lights in the lower fascia and the attractive new taillights.

On the inside is where the 2012 Chrysler 300 and 300C Luxury Series really set themselves apart from the rest of the 2012 300 lineup. Throughout the interior Chrysler has introduced a new Poltrona Frau® "Foligno" leather that has previously been used in higher end Alfa Romeo and Maserati models, with this new leather being available in either Black or MochaChino (lightish brown, almost natural looking leather – pictures are available in the gallery on the right). Complementing the new Italian leather is premium Nappa leather on the door armrests, center console armrest and seat bolsters; providing for a two-tone finish to the seats when the MochaChino is chosen. Of course, like any good luxury car, these luxorious seats feature heated and cooled surfaces to front and rear seats as well as 12-way power adjustments to both front seats. The leather treatment on the 2012 300 and 300C Luxury Series sedans extends to the steering wheel, where the leather wrapped wheel features new metal pedal shifters and a segment-exclusive heating system that covers all 360 degrees of the steering wheel. I have had the luxury of driving the new Chrysler 300 with the 8-speed transmission and the wheel-mounted paddle shifters and I can attest that Chrysler has done an amazing job with their new paddle shifter design – being more comfortable and driver-friendly than some other companies’ paddle systems. Finally, the luxury touch is completed with a new Natural Pore Mocha wood with a matte finish that is said to enhance the beauty of this real wooden trim.

Last and certainly not least is the news that the 2012 Chrysler 300 and 300C Luxury Series sedans are among the most fuel efficient non-hybrid vehicles in the segment. This is thanks in part to the powerful engine lineup that begins with the 3.6L Pentastar V6 – churning out 292 horsepower and offering best in class fuel economy in a variety of forms thanks to the new 8-speed automatic transmission. The rear wheel drive version of the 2012 Chrysler 300 offers 19 miles per gallon around town, 31mpg on the open road and a combined figure of 23mpg, all of which are unsurpassed in the luxury full size sedan class. Next, the all wheel drive models fitted with the 8-speed automatic transmission and the Pentastar V6 offer 18mpg in the city, 27mpg on the highway and a combined figure of 21 miles per gallon – numbers which make the 2012 300 the most fuel efficient AWD sedan in the class.

The other engine for the 2012 Chrysler 300C Luxury Series sedan is the tried and true 5.7L Hemi V8. Pumping out 363 horsepower and using Chrysler’s Fuel Saver Technology, the Hemi-powered 300C offers impressive fuel economy figures of its own with 16miles per gallon around town and 25mpg on the open road for the rear wheel drive models and 15mpg around town/23 on the highway for the all wheel drive models.

Check out the gallery on the right by clicking any of the thumbnails for a closer look at the 2012 Chrysler 300 Luxury Series sedan and stay tuned to TorqueNews.com for all of your biggest automotive news and opinions!